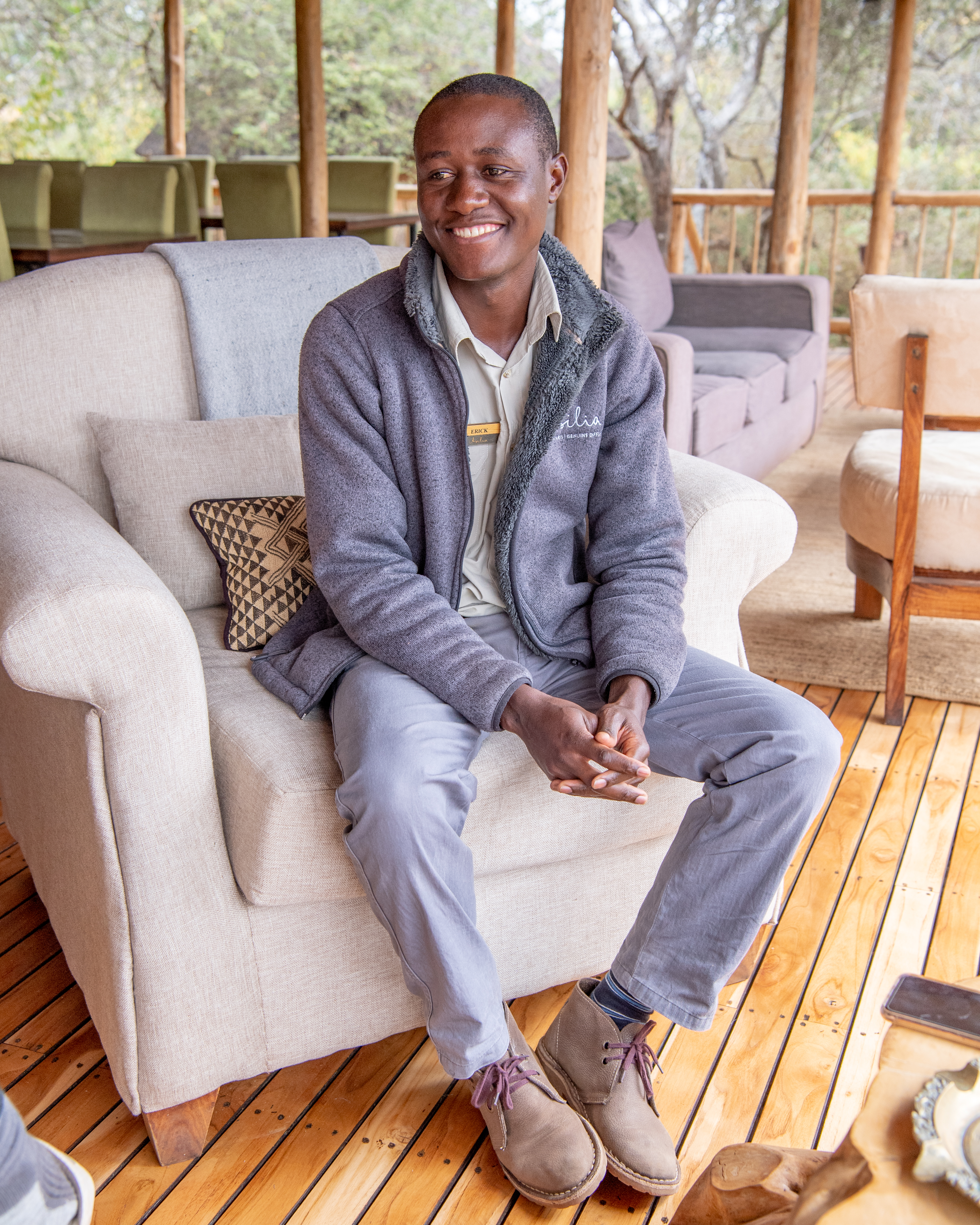 We want to introduce you to our wonderful waiter Erick who has been part of the Asilia family for two years. Erick’s enthusiasm is infectious and his passion for wildlife is evident when he regales guests with facts about his favourite animal, the cheetah. One day, he hopes to become a guide so he can learn more about the animals of the African bush and share his knowledge. Please scroll down to read more about Erick.

The cheetah — they are so elegant that they almost look regal when they walk. I just think they have incredible adaptations. This is an animal that can accelerate faster than a race car; imagine being able to run 96km an hour! I’ve been very lucky to see them hunting and my favourite memory was when three boys in a coalition ambushed a Thompson’s gazelle. They had arranged themselves into a triangular position with the gazelle in the middle. The poor gazelle was so focused on the boy at the front that it walked straight into the other two cheetahs. It was amazing to watch such a high level of organisation!

It has to be an encounter I had with lions in the central Serengeti. We were travelling from Seronera to Arusha and we spotted some lions by the side of the road, so we pulled over and took some photos. I noticed that one of the females was staring directly at me and snarling which was unusual behaviour, but a minute later I understood why. Two tiny cubs emerged from the long grass and started jumping over their mother! She was giving us a small warning not to come any close because she was protecting her babies.

What is it that you like about the bush?

I am really fascinated by all the wildlife and I like how being here makes me realise that we, humans, are also just animals. We have the same basic requirements and we even exhibit similar behaviours. It’s also the peacefulness of the bush. Working in the city can be exciting with all the bustle, but here, you can hear the sound of nature: the birds, the lions, the hyenas. In the city, all you hear is the rumble of cars.

Securing a job with Asilia has enabled me to look after my parents which I think is my biggest achievement. I am thrilled that I can help my parents financially – I even have plans to build them a new house in the near future. It’s the least I can do for all that they gave up for me and my four siblings.

I also have a beautiful wife and a little boy who is just four months old. I am so proud that I can support my family, but I do miss them a lot. It is very special for me to be able to spend time with them on my off days.

What are your next steps?

I have now been working as a waiter for Asilia for two years but one day, I want to be a guide. I think you can tell that I am very passionate about the animals. I just find their behaviours so fascinating and want to learn more about them. I read at any opportunity I get, and I also watch as many wildlife documentaries as I can.

The staff don’t know that I participated in a German language course before starting my job with Asilia, so I know a little bit of German. I have also been lucky enough to climb Mount Kilimanjaro. I accompanied the guides as they ascended with tourists and I managed to reach the Kibo huts at 4,700m altitude. It was an amazing experience.