After the devastating loss of Sudan, who was the last male Northern White rhino, earlier this year, this is the news we have all been waiting for!

Ol Pejeta Conservancy have just released the following statement: the first ever hybrid rhino embryo has been successfully created by a consortium of scientific organisations in Europe. 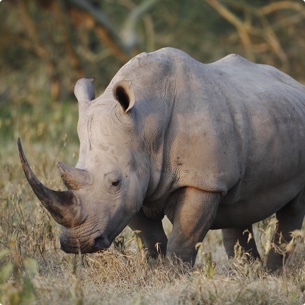 “On March 18, 2018, the world was devastated by the loss of Sudan, the last male of his kind, to age-related illnesses. It struck a terrible blow for the species, who were then functionally extinct. Thanks to the continued dedication from scientists, conservationists and philanthropists across the world however, the miracle of their renaissance may now actually become a reality.” – Ol Pejeta Conservancy

What Does This Mean For The Northern White’s Future?

We hope to be able to soon welcome the scientists to Ol Pejeta Conservancy, where they will perform the ovum pick up (OPU) – harvesting eggs from Fatu and Najin, Sudan’s granddaughters and the last two remaining Northern White Rhinos in the world. Once they have the eggs, they can begin the process of bringing a species back from the very brink of extinction.

In the meantime, Ol Pejeta Conservancy will continue to take the best possible care of Fatu and Najin and the herd of southern whites specifically selected to one day, hopefully, become surrogates for northern white rhinos. If you would like to do your part for the future of the Northern Whites then please take a moment to donate in memory of Sudan and the entire species.

If you’re joining us at Ol Pejeta Bush Camp in the future, be sure to stop by the sanctuary where Fatu and Najin spend their days. Inside the 700-acre Endangered Species Enclosure, you’ll have the opportunity to spend time with these majestic animals in a private and intimate setting, listening to their dedicated keepers tell of their amazing journey to Kenya from the Czech Republic and the efforts to preserve the last of this highly endangered species.