Reptiles On Safari : Discover Africa’s Cold-Blooded Vertebrates On Your Next Safari

Next time you’re spending a few days in the African bush with us, be sure to keep an eye out for some of Africa’scold-blooded vertebrates.

All reptiles have a backbone, which makes them vertebrates. These animals tend to be cold-blooded, and unlike mammals, they cannot create their own body heat. Therefore it is highly unlikely that you will find reptiles in polar regions. If you do, they are most likely to hibernate during winter.

Most reptiles lay eggs with the exception of a few species,certain kinds of snakes, chameleons, and lizards give birth to live young: either directly (viviparity) or via internal eggs. Ovoviviparous animals produce eggs, but instead of laying eggs, the eggs develop and hatch within the mother’s body. By delaying birth after hatching, the young ones enter the environment in a more advanced stage of development. Reptiles are also easily identified by their scales or scutes.

Monitor Lizards are excellent swimmers and can stay submerged for up to 20 minutes at a time. They are native to Africa, Asia and Oceania. These lizards have a varied diet, are fond of crabs and mussels but will eat any suitable vertebrates like frogs, small fish, birds and bird eggs. They are notorious raiders of unattended crocodile nests.Females will often claw their way into an active termite mound and lay their eggs inside. The termites then seal the hole again and the eggs are kept warm and moist while safely inside. They take up to a year to incubate.

There are a few places in East Africa where you can spot a Monitor Lizard but Rubondo Island is a special favourite. If you would like to visitRubondo Island Camp and meet all of their friendly critters please enquire here.

Crocodiles are believed to have been around since the days of the dinosaurs. These reptiles live in warm, murky waters and mainly feed on fish or, as many people know already and one of the main reasons for people travelling to Africa, they will feast on wildebeest and zebra as they migrate through Kenya and Tanzania on their Annual Migration. Like us, crocodiles too have learnt to expect the herds and can be found waiting on the banks of rivers during the seasons when the herds are around. 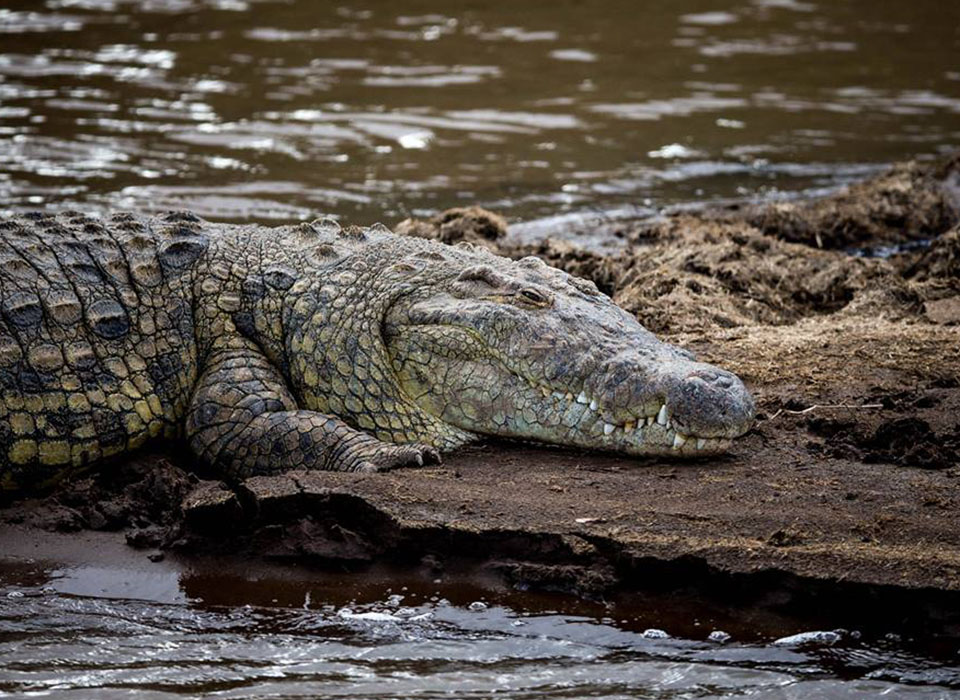 Despite being classified as “reptiles”, crocodiles are more closely related to dinosaurs and birds (which are actuallyavian dinosaurs) than to most animals classified as reptiles. Crocodiles have an average lifespan of 30-40 years. These animals can swim up to 15km/hr and are amongst the most feared reptiles because of their size, aggressiveness and powerful jaws. Ever heard of the term “crocodile tears”? They do really produce tears. However, it’s not actually crying. While they eat they swallow too much air,which gets in touch with lachrymal glands (glands that produce tears) and forces tears to flow.

Six out the of seven known species of sea turtles are critically endangered. The main factors that contribute to the decreasing number of sea turtles are poaching, loss of nesting or feeding areas, accidental catch, ocean pollution and weather changes. Green sea turtles are named for the greenish colour of their cartilage and fat, not their shells. When born these creatures are only 5cm long, but they can grow up to 1.5 meters in length and can weigh over 300 kg! Females can lay 110 eggs in a nest and average between two to eight nests during a season. When it is time for them to lay their eggs, they return to the same nesting grounds where they were born.

Each year at Matemwe, an annual turtle release is planned in April. Our Matemwe team, staff from the Mnarani Turtle Centre, and hundreds of others join together on the beach to be a part of this very special moment.TheMnarani Turtle Conservation Centeris a community-based NGO which was established in 1993 to conserve the population of sea turtles in Zanzibar.

If you are visiting Matemwe, a visit to Changuu aka Prison Island is a must.The island is approximately six km from Stone Town and was uninhabited until the 1860’s when Zanzibar’s first Sultan then gave it to two Arabs who were going to use it as a prison for rebellious slaves.

How did the giant tortoises get to the island?

These giant tortoises are descendants of those living on the Aldabra Atoll islands in Seychelles. In 1919 the British governor of Seychelles sent a gift of four Aldabra giant tortoises to Changuu Island from the island of Aldabra. These tortoises bred quickly and soon they numbered around 200 animals. However, people began to steal the tortoises to sell as pets or for food and their numbers dropped rapidly. By 1988 there were around 100 tortoises, 50 in 1990 and just seven by 1996. A further 80 hatchlings were taken to the island in 1996 to increase the numbers but 40 of them vanished again. There a currently over a 100 Aldabra tortoises on Prison Island. This species grows to an average size of 1.1 meters long with an average weight of 250kg

Jackson’s chameleon, Jackson’s horned chameleon, or Kikuyu three-horned chameleon is more widespread in Kenya, more specifically Mt Kenya. Jackson’s chameleons were the first chameleons to be kept successfully in captivity. The male species can easily be identified because they have 3 brown horns, which are used to fight territory. Males may lock horns in an effort to push the other of a branch. The females usually have no horns. The Jackson chameleons are ovoviviparous and females can have anything between 8 – 30 babies at a time.

Africa holds so much mystery, with so many hiding places where we often find new and exciting discoveries. It is truly awe-inspiring, and we are extremely lucky to be able to call this magical land home!

Join Us On Safari
Enquire Now