As an island, Rubondo has a relatively closed land ecosystem and is small in comparison to the larger habitats associated with large carnivores. It only reaches 237km2 in extent. This means that the self-regulation of species is attained by other means one would usually associate with an African landscape.The island is inundated with the most unusual and interesting wildlife – with the majority of them being prey species. However, there are a few predators that do roam the island and are a treat to spot whilst staying with us!

Rubondo Island’s ecosystem is unique and incredibly special as well. The usual predators that come to mind such as lions, leopards, cheetah, and the like are not found on the island. This means that the more unusual predators such as snakes, Colobus monkeys, and chimps have become the island’s apex predators and find themselves sitting comfortably at the top of Rubondo’s food chain.

One of the more famous predators on the island are our chimps, which were brought to the island inthe 1960’s. Professor Bernard Grzimek of the Frankfurt Zoological Society released 16 chimpanzees on the island and today Rubondo is their sanctuary.Visitors to Rubondo Island have theuniqueopportunity to experience the habituation process of one of man’s closest relatives.

Chimpanzee are omnivorous, meaning they eat both plants and animals. Hunting chimpanzee have been well documented, as have scavenging chimpanzee. Take a look at the video below of a troop of chimps hunting a Colobus monkey, please note that this video may be unsettling to some viewers.

The introduction of the chimps onto the island provided a much-needed boost in the area’s need for apex predators and because the chimps have thrived on the island, they have been able to provide a positive influence on the island’s ecosystem.

Lurking In The Waves

The waters of Lake Victoria, that surround Rubondo on all sides, yield treasures that may seem strange but also play a vital role in the success of the island’s biological prosperity.

Crocodiles are found slinking into the water and even spot-necked otters can be seen playing in the waves. If you look upwards, you’ll be sure to spot Fish eagles soaring high above and kingfishers flitting about the water looking for a fresh fish meal.

These creatures, while they may not be a part of the island’s land dwellers, also have a role to play in the world of predators. They control the fish, crustacean, and other water-based prey populations and act as the island’s apex aquatic predators.

One of the most undisturbed ecosystems on the planet, Rubondo is a paradise for wildlife. Hundreds of species flourish here, having been rescued from difficult circumstances in other regions; over the years they have adapted to the forest. These include hippo, elephant, and even giraffe.

Bushbuck and suni forage undisturbed in the thick forest, while the sitatunga, a semi-aquatic antelope, can be spotted darting in and out of the papyrus swamps on the fringes of the lake.

The bird life on the island is phenomenal: over 300 resident and migratory species have been recorded. A visit to nearby ‘Bird Island’ by boat will reveal cormorants, African darters, egrets and pied kingfisher, and the high-pitched screeches of the African grey parrot can be heard around the island.

Rubondo Island Campsits in the southwest corner of Lake Victoria. Created for those seeking the thrill of adventure in a truly wild area, the area is largely untouched by man. Rubondo Island Camp is the only lodging on the island, you’ll be immersed in this lush and unspoiled ecosystem. 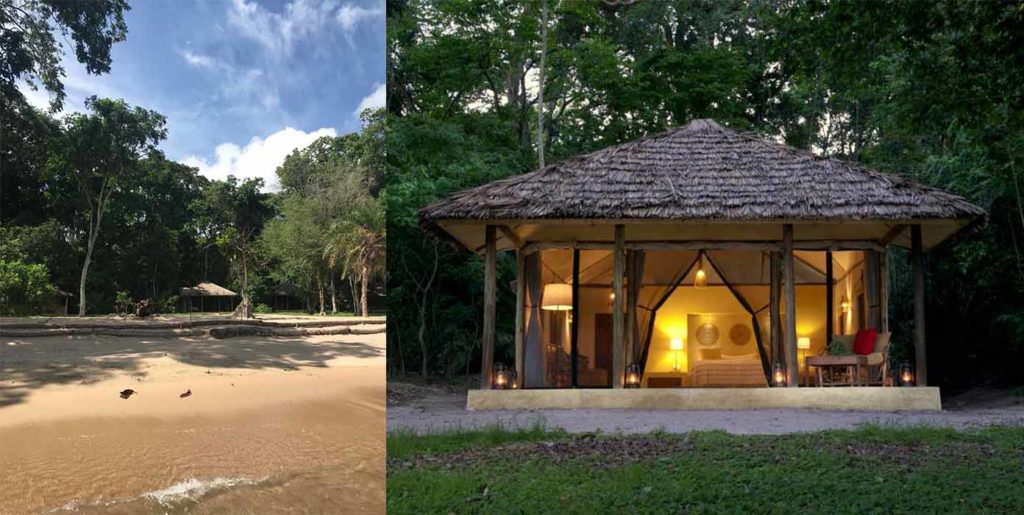