The Great Migration: a guide's perspective

Today we hear from Asilia's Tanzania Head Guide, Akil Halai. The Great Migration can be one of the highlights of any East African safari, but also feel incredibly complex or overwhelming to plan due to its ever-moving nature. Here, Akil helps to simplify the Great Migration, making it easier to understand and best help you plan your bucket list safari.

There are several maps you may seen that offer  a detailed flow of gnus moving around in a yearly circle. While these maps of the Great Migration are helpful, they should be treated as a guideline, since the herds simply do not follow a month-by-month schedule every year. Rather, they follow the rains which are, of course, unpredictable.

From the vast Serengeti plains to the beige coloured hills of Kenya’s Masai Mara, more than 2 million wildebeest, along with 250,000 zebras and gazelle migrate in a circular route over 1,800 miles each year in search of rain-seasoned grass. This spectacle is motivated entirely by standing water, grazing and local weather conditions. The wildebeest want to be in the short grass plains of the southern Serengeti, but the water and grazing cannot support them year around. This is where they choose to breed, with the opulent grass to support them. 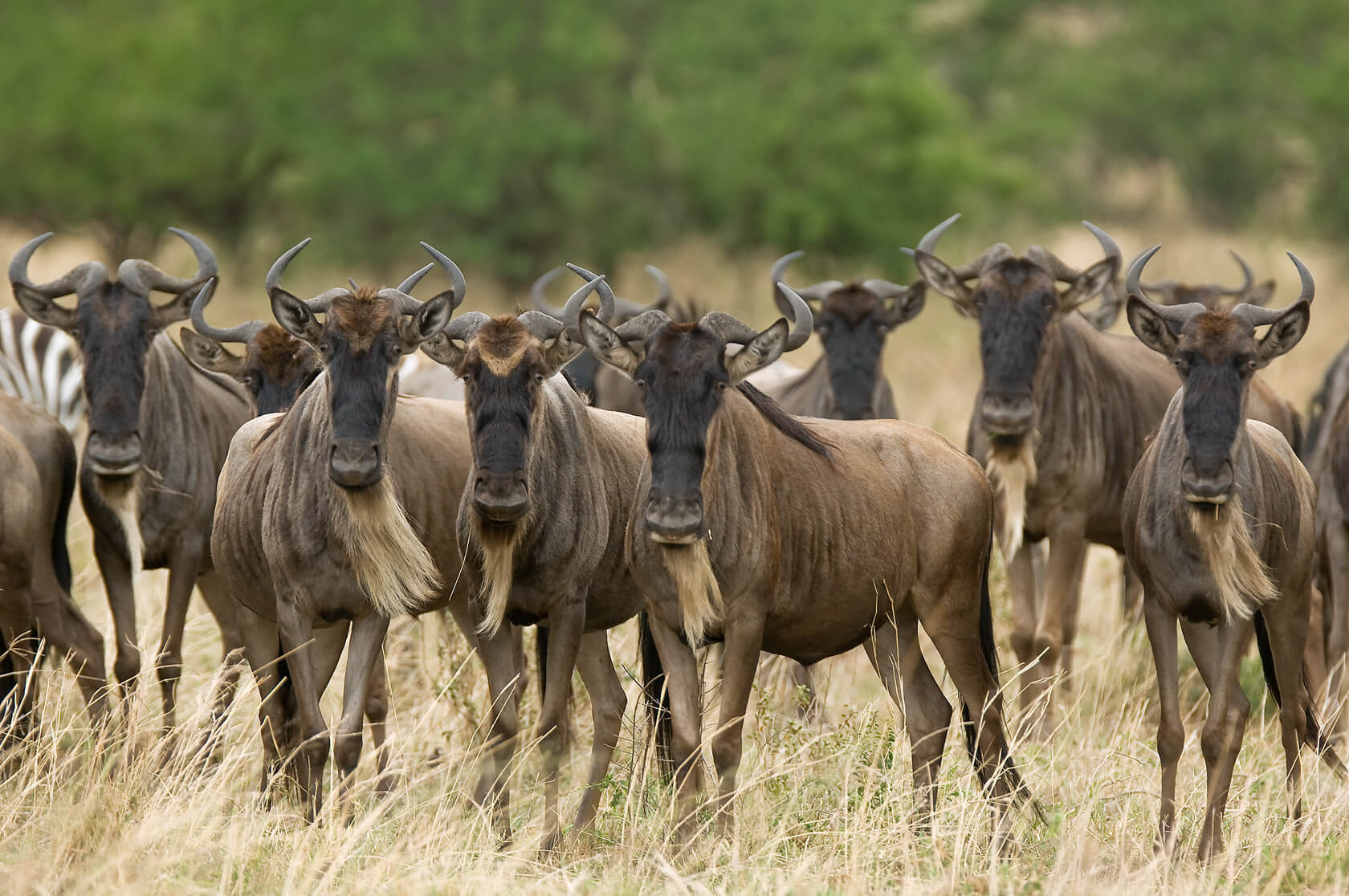 Within a relatively short time, perhaps four to six weeks, several hundred thousand calves will be born and this is where we see most of the much-awaited dramatic, predator action. These predators have anticipated this buffet for over nine months, leading to some thrilling encounters. The Migration will then move off in search of provisions in response to periods of dry weather, but the herds will leave this area as late as possible and come back as soon as they can. This means that every year is different and, in fact, every week can be different, too. 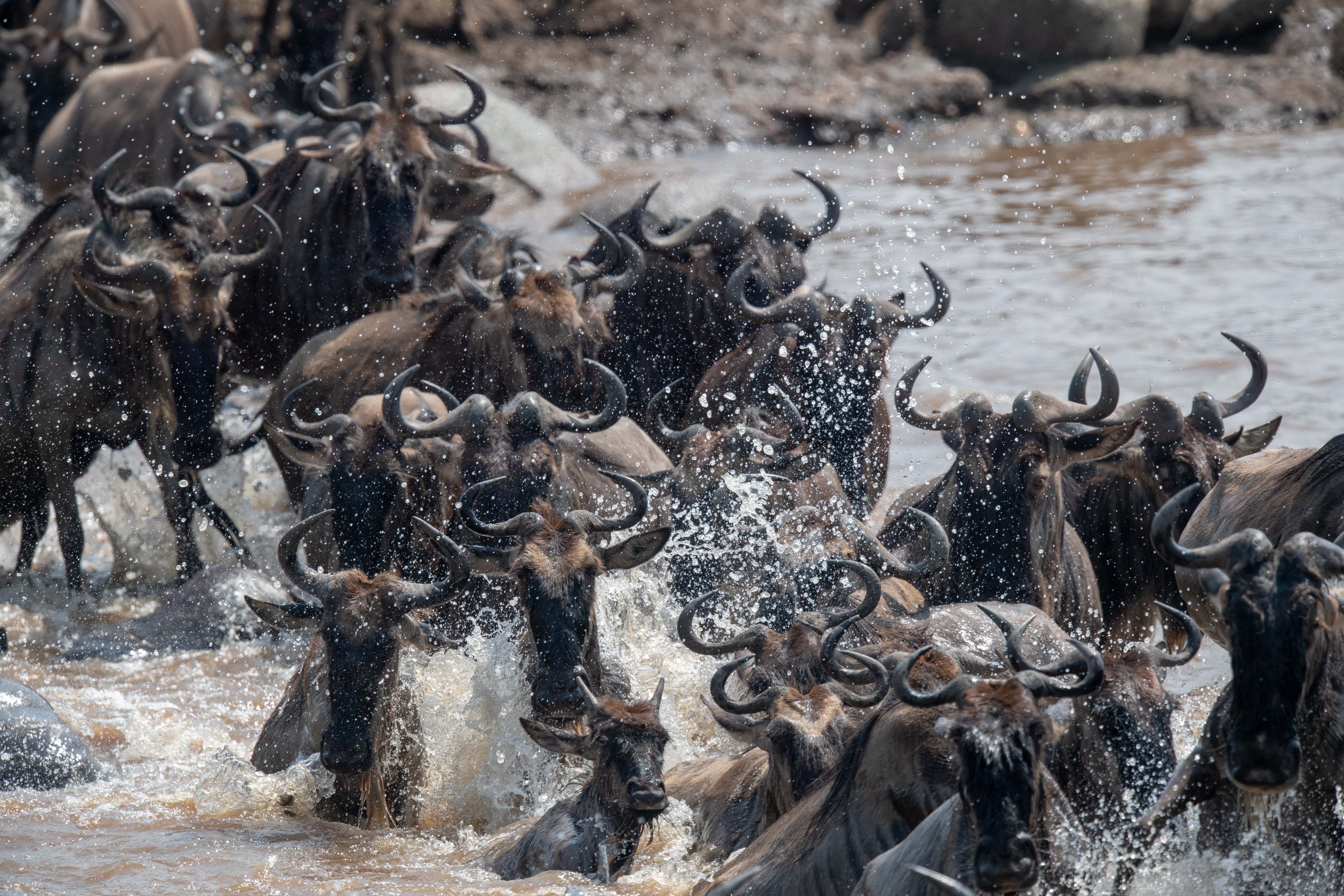 The Migration is not a continuous forward motion at all times. The herds go forward, backward and fan out across the plains. They mill around, they split up, they join forces again, they walk in a line, they spread out or they hang around together. You can never predict with certainty where they will be; the best you can do is suggest likely timings based on past experience. You simply can never guarantee the migration 100 percent.

Often, we are so engrossed in following the migration and its patterns that we tend to overlook what happens to the vast lands when these massive herds of the biggest mammal migration (in terms of numbers and actual volume) leave. The ecological effects are plentiful. The grass on the plains has been mowed through heavy grazing and will only begin sprouting again when the rains arrive. The big cats have fed so much that it is visually evident by the size of their swollen bellies. The vultures have had many a party and will now move on to other areas. The nocturnal dung beetles have ample dung collect enough food.

The humble dung beetles are responsible for dealing with the volumes of dung left behind by the thundering herds. Without them, the plains would very soon become unlivable for many species. Once the beetles scout out a leftover pile,males meticulously craft the dung into balls and roll them as far away from the unruly mound as possible, often carting a female that they have also picked up on the way. If they happen to run off their path, the dung beetle male will climb on top of his dung ball and calibrate himself using the position of the sun, moon, and stars. The pair bury the dung, which later becomes food for their babies. They will now breed happily.

All these animals that benefit from the gnus will now start their stopwatches and wait for over eight months for the gnus to be back. They wait in anticipation.