Many of us have a safaribucket list which usually involves checking off the ever-popular Big 5 collection, or if you are an avid birder, you have a list of lifers that you are longing to tick off. However, there are five more unusual animals that we think you should add to your checklist while on your East African adventure.

Aardvark, directly translated from the South African language, Afrikaans, means “earth pig”. However, this animal is not part of the pig family as its name suggests. The aardvark is a burrowing, nocturnal mammal. Similar to the pangolin, they have a long sticky tongue to easily eat termites and ants, which is their favourite food. Their large front claws are used to dig holes, as well as for protection. 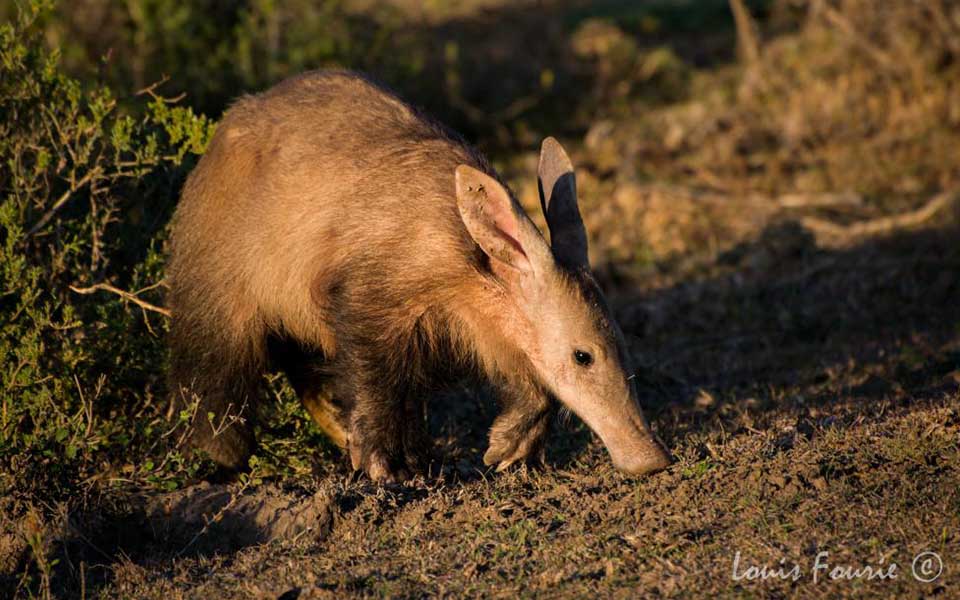 The aardvark is a medium-sized animal, they can reach sizes between 1 to 1.3 meters long and weigh between 60 and 80 kg (132 – 176 lbs). Their gestation period lasts for approximately seven months, whereafter one pup is born – hairless with their eyes open, only leaving the burrow after two weeks. Aardvarks are nocturnal beings and you are most likely to spot one while you’re out on a night game drive, especially during the wetter months of the year when there are lots of grubs and insects for them to feast on.

Sadly, known as the world’s most trafficked mammal, members of the pangolin species are either listed as endangered or vulnerable. There are only eight species in the world, four of which are found on the African continent and four species which are found in Asia. The primary threat to pangolins is poaching and hunting for illegal wildlife trade. They are predominantly poached for their meat which is considered a delicacy in countries such as Vietnam and China. They are also hunted because of a false belief that their scales can be used as a treatment for various medical problems.

The pangolin’s appearance and the length of the tongueare the most iconic elements of the animal. 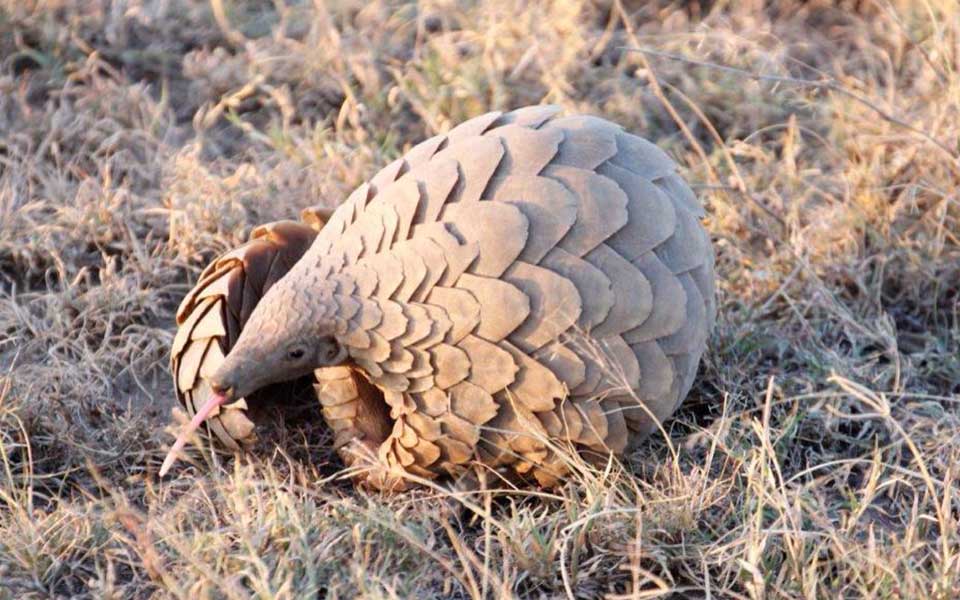 This image above shows only the tip of the pangolin’s tongue – they have tongues which are often much longer than their bodies, making it easy for them to reach the inside of an ant nest, one of their favourite meals. Their tongues can reach up to 40cm and are attached near their pelvis and last pair of ribs. The scales of a pangolin are made from keratin, which makes their tail hard and strong enough to cut into a predators skin. When a pangolin feels threatened, they can curl themselves up into a ball to protect themselves.

This prickly animal is fairly common but rarely seen during the day. If you do spot one roaming around in the sunshine, it is usually because they are ill or something has scared them out of their burrow – porcupines are known to spend several days at a time hidden in their dens, especially if the weather is bad!

Porcupines may not look the part, but they are rodents from the same group of species as rabbits, mice and squirrels. A porcupine’s most obvious feature is, of course, itsquills. Some animals have up to 30 000quills on their body. Contrary to popular belief they cannot ‘throw’ or ‘shoot’ their quills, when they feel threatened the animal tenses up and attacks predators using its tail, embedding quills into the skin. 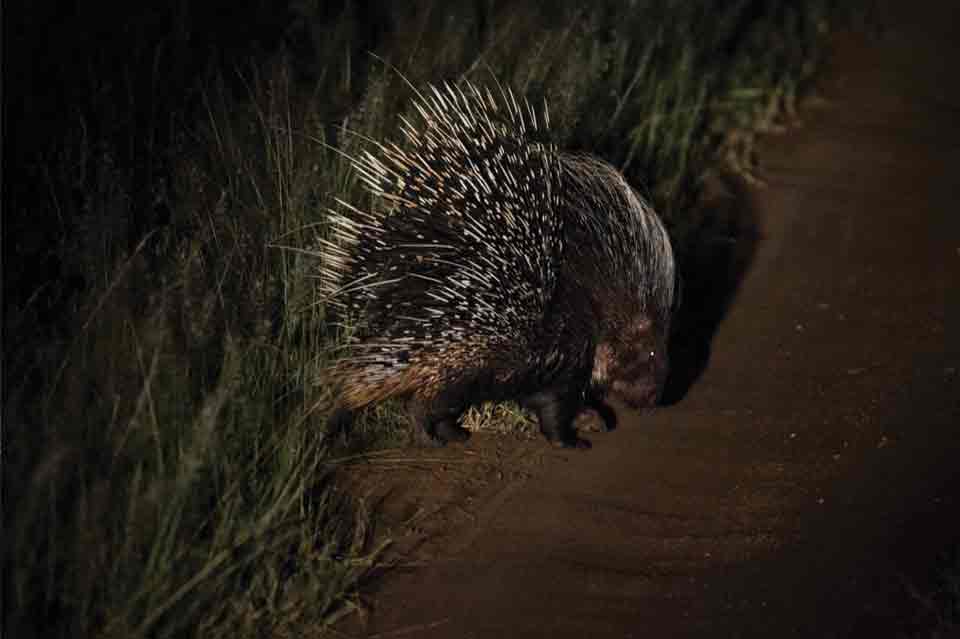 Frequently mistaken for a cheetah or genet, this African wildcat has a slim body, with long legs and the biggest ears in the world of cats. The servalis generally found in areas close to water and prefers busy areas with tall grass so that they can hide and sneak up on their prey.Serval sightings on safari are less common and the best time to see them is in the firsthalf hour after sunrise and just before sunset, also known as the ‘golden hour’ amongst photographers. 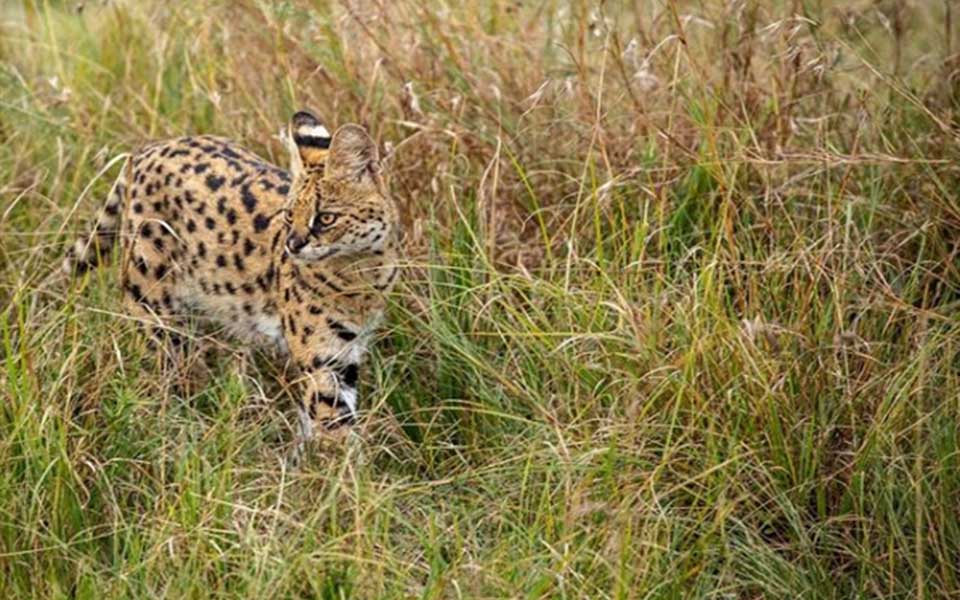 The hunting technique used by servals involves jumping up to 3 meters into the air and using its front paws to catch their prey. They mainly eat rodents and birds, but on occasion,they do snack on frogs, insects or use their long forelimbs to hook fish out of water.

Wild dogs are, unfortunately, also classified as endangered and are native to sub-Saharan Africa. Humans are the main reason why these animals are endangered. They face threats such as habitat loss due to overpopulation by humans, threats from other predators, and health issues such as rabies. The scientific name for a wild dog,Lycaon pictus, literally translates to painted wolf, which perfectly describes the appearance of the African wild dog.

One of the most frequently asked questions are; “can wild dogs be tamed?” The answer is no, these animals cannot be domesticated. People have attempted to tame wild dogs in the past, but they were unsuccessful. This is mainly due to the fact that African wild dogs do not possess the same trusting and affectionate traits that “man’s best friend” does. Wild dogs are notoriously hard to spot while on safari, however, it has been said that they are easier to find when they are denning and during the first 3 weeks after giving birth to pups which generally happens between the months of June through to August each year.