Our Migration Camps: Ubuntu and Olakira

Kimondo is no longer available

Since late 2021, Kimondo has been superseded by our two much-loved tented migration camps: Ubuntu and Olakira.  Similar to Kimondo, Ubuntu and Olakira each move during the year between two outstanding sites in the north and south of the Serengeti. This means that guests who choose Ubuntu or Olakira are likely to see the Great Migration herds regardless of when they visit.

At the beginning of the year, the wildebeest gather to calve, which brings both an abundance of vulnerable young calves as well as dramatic scenes as big cats gather on the hunt.

From June until the end of the year, the herds move westerly and then northwards up through Tanzania's Serengeti and into Kenya's Masai Mara, enduring tense and exciting river crossings along the way. 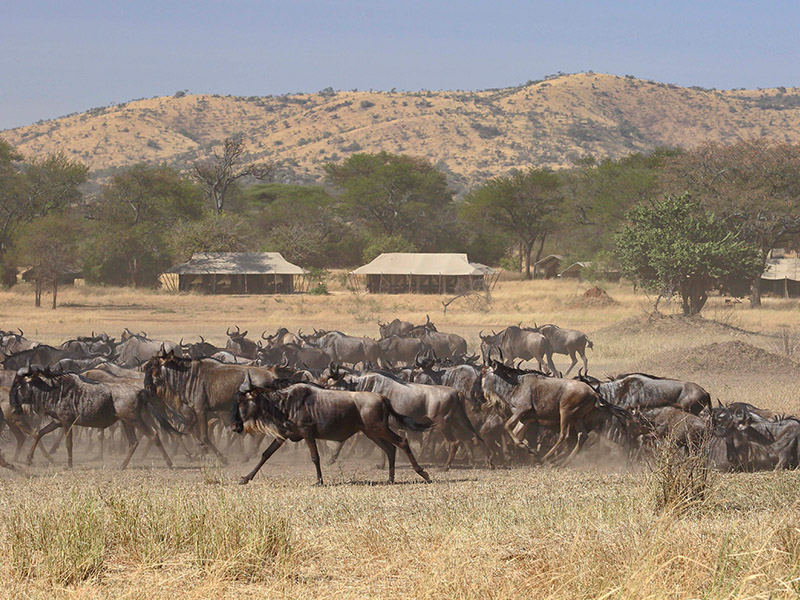 In addition to our mobile migration camps, we have a range of tented camps and lodges around the entire Great Migration route in the Serengeti-Mara ecosystem. Travel on a once-in-a-lifetime Great Migration safari at any time of year and stay in our comfortable, elegant accommodation with the wildlife on your doorstep.
Learn everything you need to know about planning the ultimate Great Migration Safari in our eBook guide.  Inside the guide you'll find: a month-by-month summary; a detailed map of how the migration moves; a selection of the best places to stay on safari; and expert tips for an unforgettable safari.

Olakira: From start to finish my wife and I were wow'ed by the team at Olakira. It was a perfect Safari experience with great animal sightings and a wonderful "glamping" experience. The room was unique, comfy and fun to watch/hear animals from. Our guide Kanael was very knowledgeable and accommodating when out on safari. All meals were fantastic with great service as well - fun to interact with the other guests. It was evident the whole staff truly cares and really makes a guest feel special. We did another camp (Sanctuary) in the crater that was similarly priced and Olakira was head & shoulders better. If you are considering a safari Olakira is the place to do it. - hunerb2015

Ubuntu: This was our second trip to Africa but our first to Tanzania and the Serengeti National Park. This was also our first time staying in a tented mobile camp. This experience turned out to be the highlight of our 3 week trip. I can't express enough how impressed I was with the staff at this camp. From our guide Godson, to Samuel the camp manager and to all of the men working here the service was superb. The chef was excellent, the bartender was always accomodating and the morning wake up call, with coffee placed in our room, was delightful. Godson made our safari drives exciting, adventurous, educational and just plain fun. We came away with amazing photos and memories. I will always remember this group of men for their kindness, their smiles, their attention to detail, their singing and for taking such good care of us. I definitly left a piece of my heart at this camp. - lakepleasant2019

Olakira: It’s difficult to put such perfection in words. But it’s true. Everything was absolutely perfect. The service, the food, the room, the adventures on the safari, our guide, the management of the camp. I’ve never met a team more dedicated to their cause than the Olakira family. If you do a safari, do it right. - Andashtravels

Ubuntu: Arrived with members of my family not really knowing what to expect, but these guys were flawless in their hospitality. They really thought of everything, and were the most helpful and gracious hosts. The rooms were fully functional, and the staff were on hand for anything we needed. They also spent their evenings having drinks with us around the fire and dinner at a long table, it was a pleasure getting to know all of them. The food was excellent as well. We also had an excellent guide (David) who had great knowledge of the area and went above and beyond to give us an unforgettable experience. We were in an open vehicle which made all the difference (most other tours had regular 4x4s), which meant we experienced everything in a far superior way. We saw the most incredible animals and scenery in the 3 days we were there.