When to see the Great Migration

The best time to see the Great Migration each month

Alternatively, you can learn more about when to travel via through this month-by-month breakdown of the Great Migration.

Whether the great herds are calving in the south or on the move north in search of greener pastures – and then back again – there is a huge variety of astounding scenes unfolding before you. 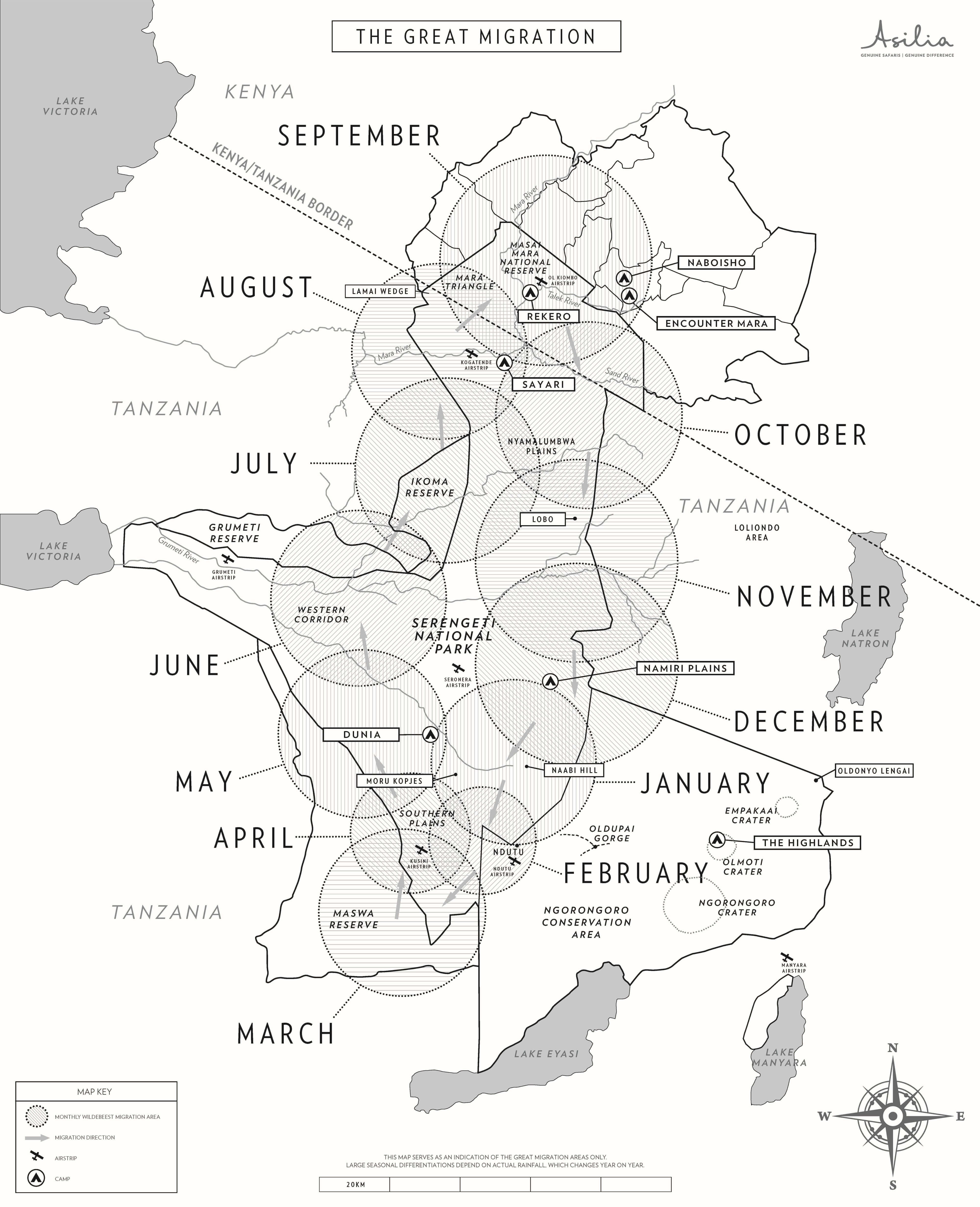 Learn everything you need to know about planning the ultimate Great Migration Safari in our eBook guide.  Inside the guide you'll find: a month-by-month summary; a detailed map of how the migration moves; a selection of the best places to stay on safari; and expert tips for an unforgettable safari. 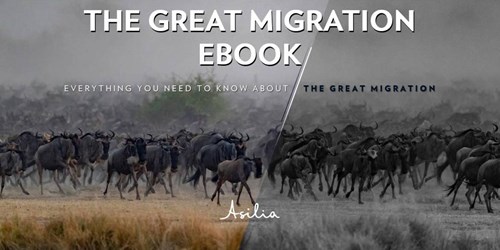 You can see the Great Migration at any time of year. It is possible to look at historic migration patterns to predict where the herds will be at a particular time, but ultimately these are wild animals and the annual rainfall they rely on to stimulate grass growth is becoming more unpredictable. Asilia's camp lie all along the migration route, proving our guests with the best opportunity to see the migration up close when on safari.

Learn more below about the different season of the Great Migration:
January to March: calving season | April to mid-June: the trek north | Mid-June to November: river crossings | December: calving begins 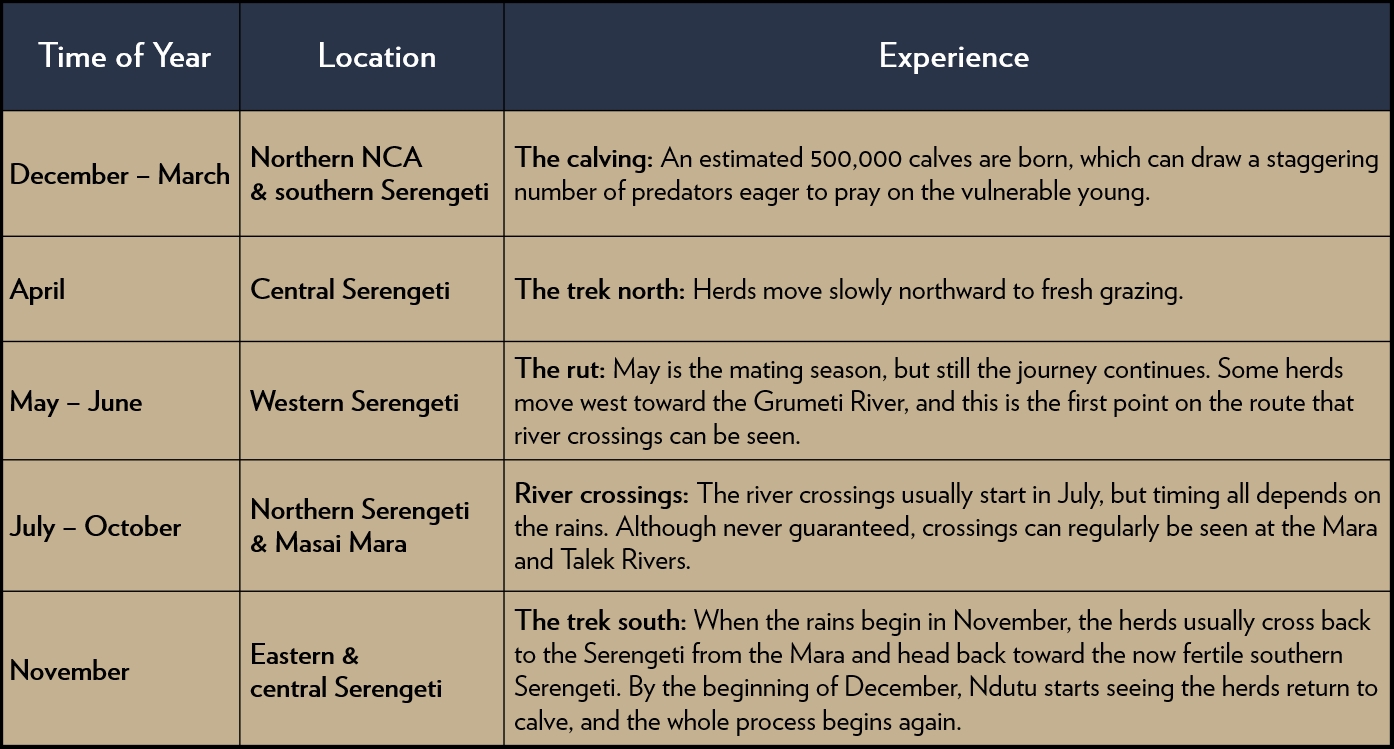 The herds congregate on the short grass plains of the southern Serengeti and westernmost regions of the Ngorongoro Conservation Area. An estimated 500 000 calves are born during a two- to three-week window in February. This mass calving draws a staggering number of predators eager to prey on the vulnerable newborns. 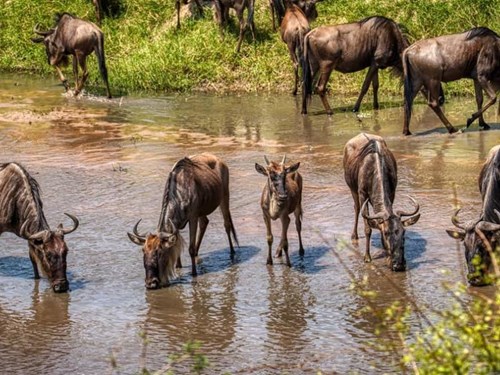 April to mid-June: Season of the Trek North and The Rut

As the rains come to an end and the ground dries, the herds start making their way north into the central Serengeti where the grass is still fresh and they can graze and tend their young. Moving slowly, they graze as they go, making the most of the fresh grass. Mating season begins and the male wildebeest do fierce battle for a mate. Throughout the rut, the journey continues as some herds head west into the Western Corridor and cross the Grumeti River. 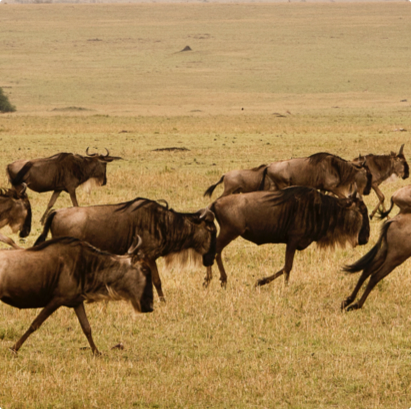 The herds head towards the north of the Serengeti. The river crossings, considered by some to be the most exciting events of the Great Migration, usually start in July, but timing all depends on the rains.

The herds can be found in the Northern Serengeti as well as in Kenya’s Masai Mara. Daily river crossings can be seen at the Mara and Talek rivers – both often central to highly dramatic scenes.

Later, the herds usually cross back to the Serengeti from the Mara and head towards the now fertile southern Serengeti. The herds travel fast and cover long distances in a single day. By the beginning of December, Ndutu starts seeing the herds return to calve, and the whole process begins again. 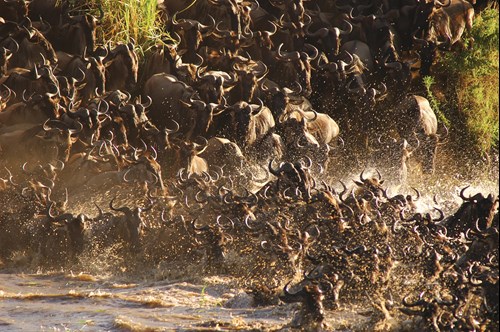 The herds congregate on the short grass plains of the southern Serengeti and northernmost regions of the Ngorongoro Conservation Area. An estimated 500 000 calves are born during a two- to three-week window in February. This mass calving draws a staggering number of predators eager to prey on the vulnerable newborns. 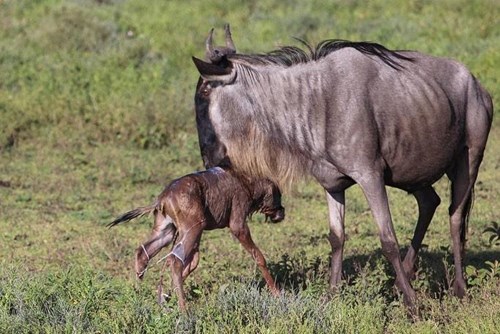 The Great Migration from January to December

Wildebeest begin to gather in the southern plains, from Moru south to Naabi, Kusini and Ndutu. The short grasses here are rich in phosphorus and magnesium due to the volcanic ash of the calcrete layer just below the plains’ shallow soil. Pack your waterproof items, as there may be intense thunderstorms throughout the region. You may be rewarded with a few early calving sightings.

February is peak calving month, and there’s nothing quite like the sight of hundreds of thousands of newborn wildebeest taking their first steps amid stationary herds. You can spot them from the Ndutu and Kusini plains, all the way toward the Ngorongoro Highlands. This is the driest month of the rainy season, although sparse showers still occur. 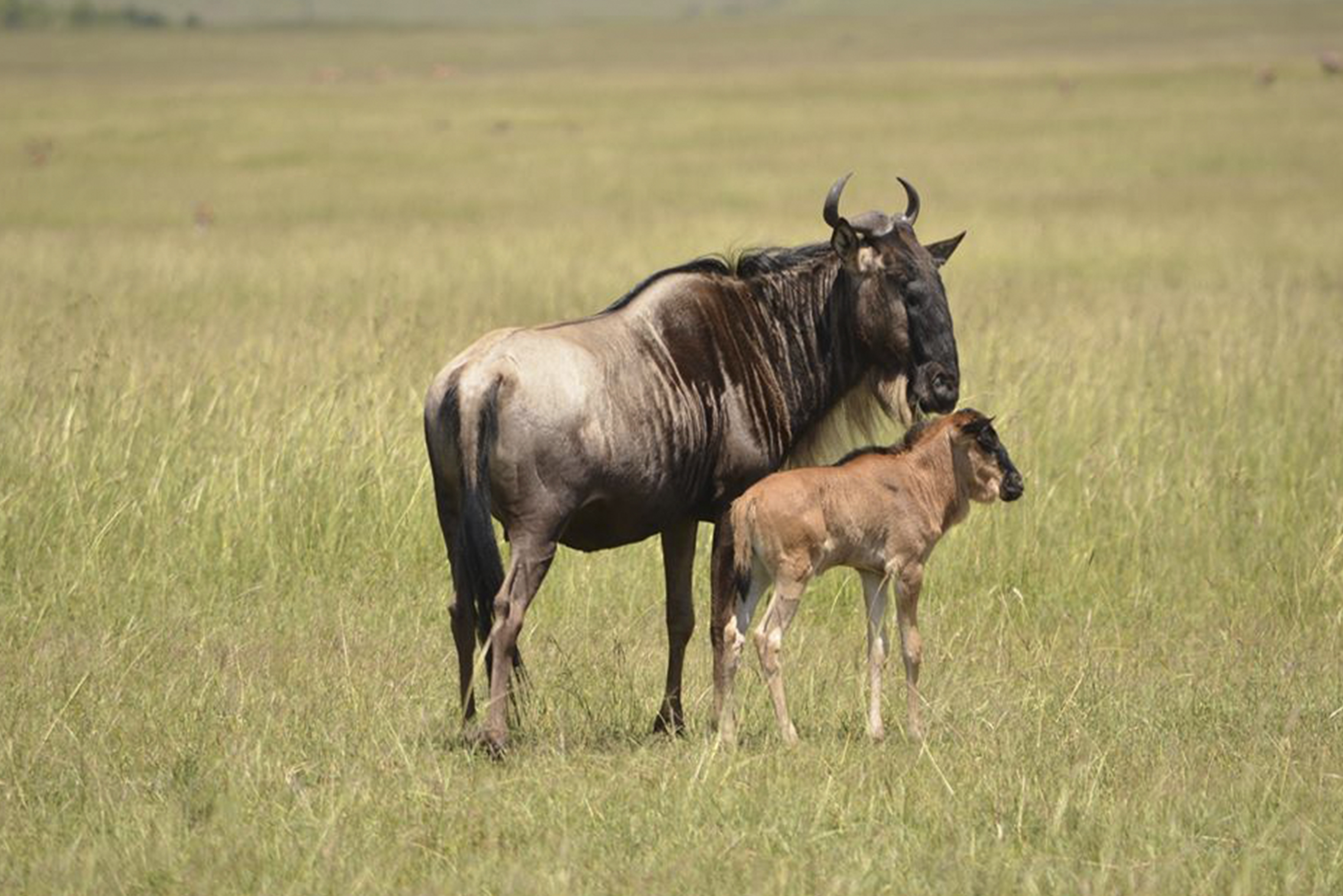 Toward the end of the calving season, the herds are mostly still stationary in the Ndutu-Kusini area, with some animals permeating even further south into Maswa and east in the direction of Namiri Plains (prime predator country, so keep your camera close). The last of the wildebeest calves are born amid heavy, regional thunderstorms.

This is the last month you’ll be able to witness the massive herds (plus calves) taking it slow on the plains in the Naabi and Kusini areas. They’ll be making the most of what remains of the nutritious Digitaria, Sporobolus, Andropogon and Cynodon grasses before beginning their long and often perilous journey north.

Starting this month, the wildebeest will continually be on the move, heading north through the Moru Kopjes and toward the Western Corridor. Dramatic thunderstorms (good to photograph) persist, providing water to the medium-to-tall Pennisetum and Tussocky Themeda grasses that the herds will now be grazing on. There is slightly less nutrition in the vegetation, prompting the animals’ continued movement northward.

The Great Migration is in full swing, travelling swiftly up through the Western Corridor and Grumeti Reserve. It’s peak rutting time, as well as the beginning of the dry season, though there are still localised showers in the north. From now on, the animals’ nutrition depends largely on the growth stage of the Digitaria, Pennisetum, Eustachys and Themeda grasses anchored in nutrient-rich clay amid the woodlands.

For wildebeest, the grass really is greener on the other side — of the Mara and Sand rivers, that is. Crossings are the stuff nature documentaries are made of, and a stay at Sayari means you’re perfectly positioned to catch the action. The head of the herd will have reached the Kogatende area in the northern Serengeti, ready to cross the Mara and Sand rivers, complete with hungry crocodiles lurking in the water. 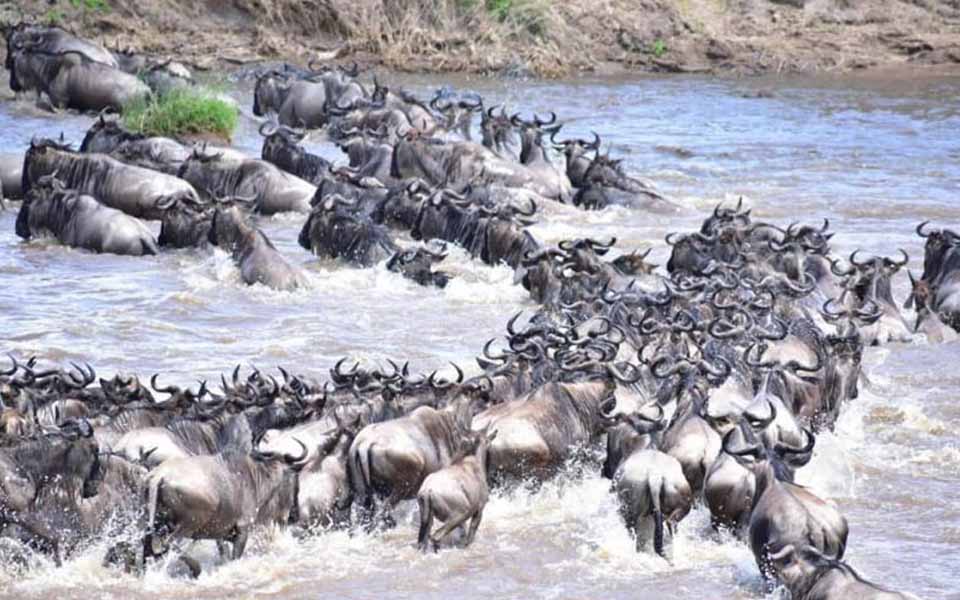 For the most part, herds will cross south to north, drawn by the more nutritious grazing on the northern side thanks to earlier showers. However, some crossings also occur in the opposite direction. For spectacular sightings of the bulk of the wildebeest herds, interspersed with dazzles of zebra and herds of antelope, head to the Lamai Wedge and Nyamalumbwa Plains.

River traffic flows in both directions between Kenya and Tanzania in September, though a southerly direction will prevail by the end of the month. This treacherous traverse is one of nature’s greatest and most tragic spectacles, and tens of thousands of animals will die in the attempt. The rains remain absent in the south, with sparse showers still occurring in the north.

The tail end of the herd crosses the river from Kenya down into Tanzania, as thunderstorms begin in the north. Meanwhile, the bulk of the animals are moving back down into the Lobo Valley region and Grumeti Reserve, tracing their epic annual circle back south toward their calving grounds. 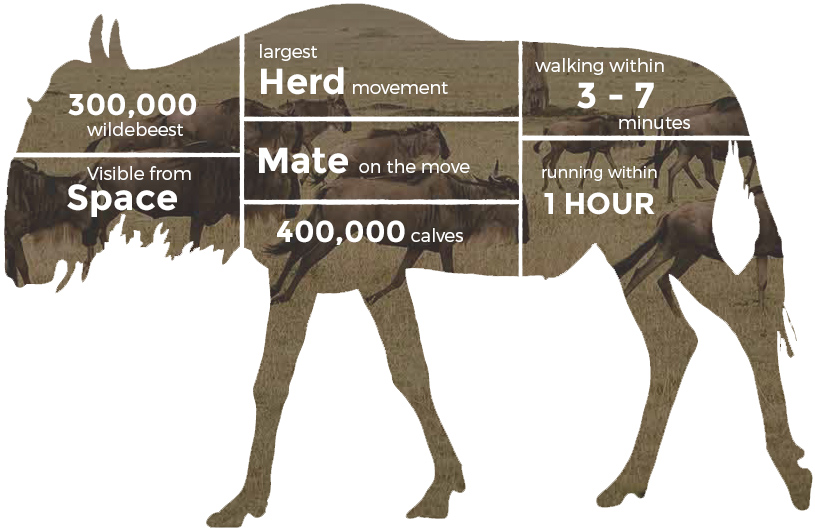 Marching ever onward, the herds have largely left the north and are passing through the Lobo region toward the central Serengeti. Rain is still scarce here, and the nutrition inherent in the grasslands is less than ideal. Interestingly, the reason the wildebeest can still share grazing land with zebra is because the two animals consume different parts of individual blades of grass.

The Great Migration is now dispersed across the central Serengeti, from as far north as Lobo, to the southern reaches of Ndutu. The rains catch up at last with the still-moving herds, and intense thunderstorms and localised showers are experienced across the region. The animals have returned to the more nutritious Pennisetum, Sporobolus, Andropogon, Cynodon and Themeda grasses, ready to calve in the south and begin the great cycle all over again.

More about the Great Wildebeest Migration

In July we thoroughly enjoyed hosting one of our beloved photographers, George Benjamin (@georgetheexplorer), who used our photographic vehicle to it’s full potential and captured a plethora of rich,…

Every year, millions of hooves drum against Africa’s plains, raising dust and devouring kilometres as wildebeest, zebra and gazelles trek across the Serengeti and the Masai Mara. Called the Great Migr…

Our Mobile Migration Camps : How Does It All Happen?

By Akil Halai – Tanzania Field Ops Coordinator The massive moment we are all anxious for that happens once or twice every year is when we begin moving our mobile camps. Asilia has three truly mo…