One of the most unique offerings of Rubondo Island Camp is the opportunity for guests to experience Professor Bernhard Grzimek's Noah’s Ark Project. In association with Frankfurt Zoological Society, Grzimek brought endangered species to Rubondo over 1966 - 1969 including 16 west African chimpanzee. Guests can now take a guided trek into the pristine tropical forest to track the primates. Over the past year (2021) 92 percent of visitors managed to see chimpanzee during their habituation experience. Since 2020 visitors have been successful in observing chimpanzee within close proximity of about 10-15 meters, with most sightings lasting 30 minutes and more. 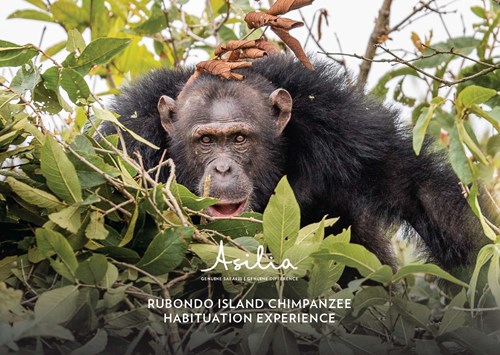 There are two chimpanzee trekking areas on Rubondo Island. Depending on where the chimps are situated and their visibility you may need to take a game drive or boat ride and then venture on foot to see them. Throughout the year the chimpanzee habituation experience can be conducted according to the availability of food and weather conditions. Take a look at our seasonality sheet on page 8 for more info. Chimpanzee are renowned for not sitting still, so guests should come prepared with a spirit of adventure and a reasonable level of fitness. Please note that the chimpanzee experience is not suitable for anyone unable to hike on hilly terrain for about two hours. Chimpanzee sightings are not guaranteed, however visiting during the dry season from June through October offers guests the best chance to spend time with our chimpanzee. Please note guests must be over 12 years of age and the group is a maximum of eight per trek. 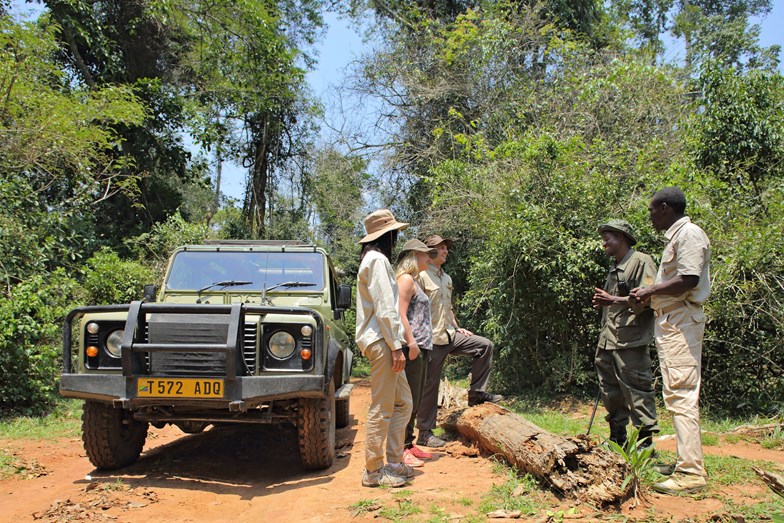 Family relationships are vital to chimpanzee. They live in extended family groups of as many as 20-120 individuals. They have a fission-fusion social organisation in which they break off into smaller interchangeable groups and periodically come together. With 30+ chimpanzee that have been successfully habituated in the north of Rubondo Island, this group of chimpanzee have developed a social structure consisting of an alpha male, alpha female, high ranked adult males, and a few adult females. It is common to hear the chimpanzee before seeing them, with their vocalisations reverberating through the forest as they call to each other in a sort of bonding ritual.

History of the Habituation

Professor Bernhard Grzimek of the Frankfurt Zoological Society established Rubondo Island as a haven for endangered species as a passion project in the 1960s. Over a four-year period (1966- 69), he released 16 west African chimpanzee rescued from European zoos in four cohorts onto the island. The animals had no rehabilitation or pre-release training but due to being wild-born after just one year on Rubondo Island, they were able to find and eat wild foods and construct nests for sleeping.

They successfully reverted to an unhabituated state characteristic of wild chimpanzee and remained secretive. From 16 founding chimpanzee, the population has now grown to over 60+ individuals and have divided into two groups (one group at the north and the other in the south). The group in the north of 30+ individuals are very well habituated and have a big home range that they move according to availability of food. Our guides have named the four calling points Kamea, Kibandala, Masekela and Kasenye. They can be accessed by car or boat depending on the direction of chimpanzee. This is the only reintroduction of wild chimpanzee from west African populations to eastern Africa and is viewed by many conservationists as a possible future for some species of chimpanzee where habitats have been encroached upon in west Africa. With the help of the Honeyguide Foundation — a key organisation working to involve local community members and training them as guides and trackers — habituation has been successful, enabling researchers to study and get closer to the chimpanzee. A team of dedicated trackers go out daily to track and log direct GPS coordinates of the chimpanzee. An Asilia guide, with a tracker and a Tanapa Ranger, will then follow with the guests.

Studying and understanding these chimpanzee is important for the future of other chimpanzee that might need to be rescued and reintroduced into the wild. Asilia’s Rubondo Island Camp is the only camp on the island and the only revenue source to keep the park protected and chimpanzee safe, while also buying locally and hiring locally to support the nearby communities. You can help the chimpanzee too; your visits continue to habituate these chimpanzee and enable us to understand them more. 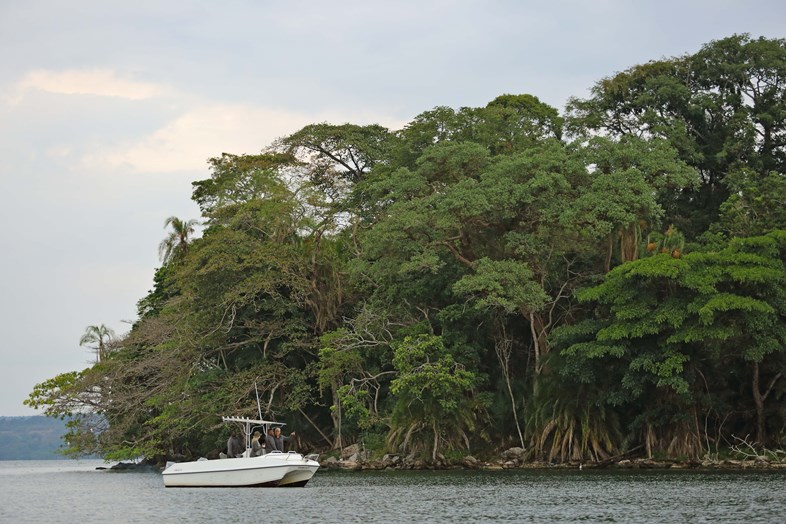 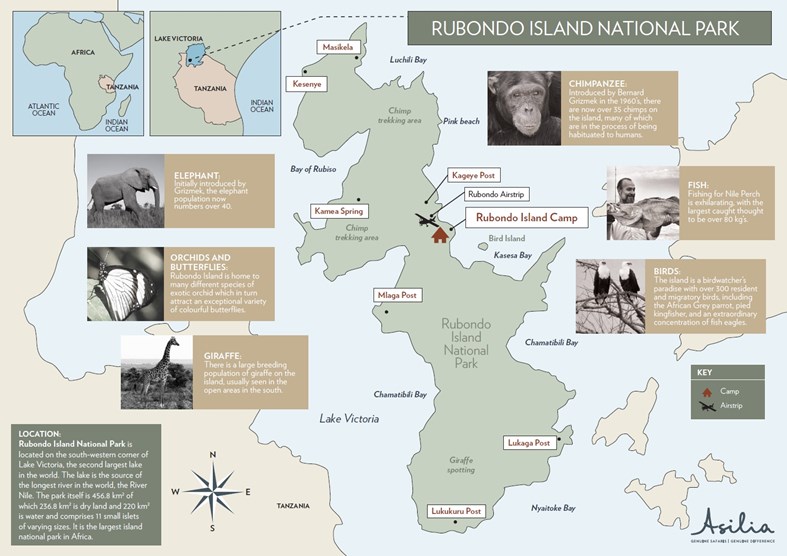 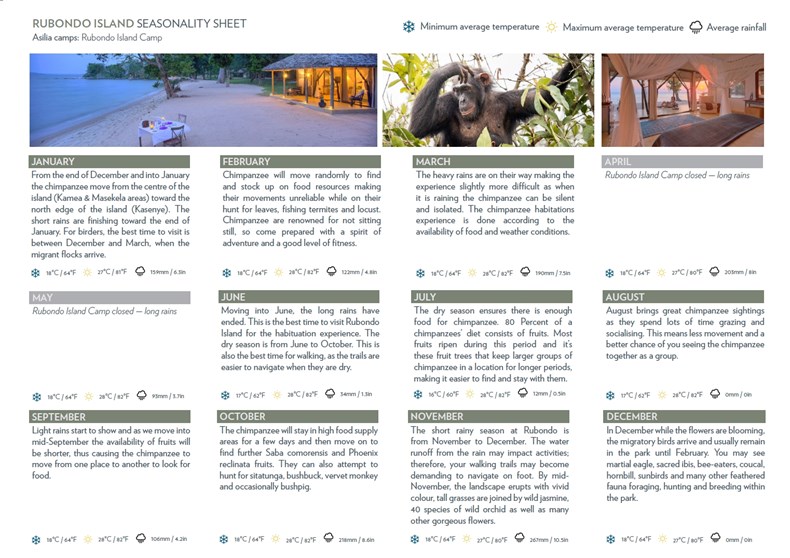