The dazzle of Kenya – In black and white

The distinctive black and white stripes of a zebra arguably make it the most easily recognisable of all the plains game you are likely to encounter on safari. With a shape resembling that of a donkey, the Swahili name, punda milia, is comedically accurate as it translates to “striped donkey”. The frequency with which they are sighted in East Africa can often lead to them being overlooked as the search for the more elusive predators takes preference. However, with two of the three species in existence accessible in Kenya, learning a little more about these striped herbivores may prove useful.

Plains and Grévy’s are the two species that can be found in Kenya. Plains zebra is the more common of the two, widely seen across Kenya and Tanzania, while Grévy’s is only found in Northern Kenya. The two species may appear similar from a distance, however, the differences between them become more noticeable upon closer inspection. The Grévy’s is typically larger than the Plains, with a taller shoulder height and longer body, but it is the stripe pattern between the two species that is the most easily identifiable differentiating feature. While Plains zebra have fairly broad stripes that wrap all the way around under the belly, the Grévy’s stripes are narrower and more delicate and do not extend to the belly. In both these species, the stripe pattern on each individual is entirely unique to that specific zebra. Much like our fingerprints, no two zebra will have the same stripe pattern. 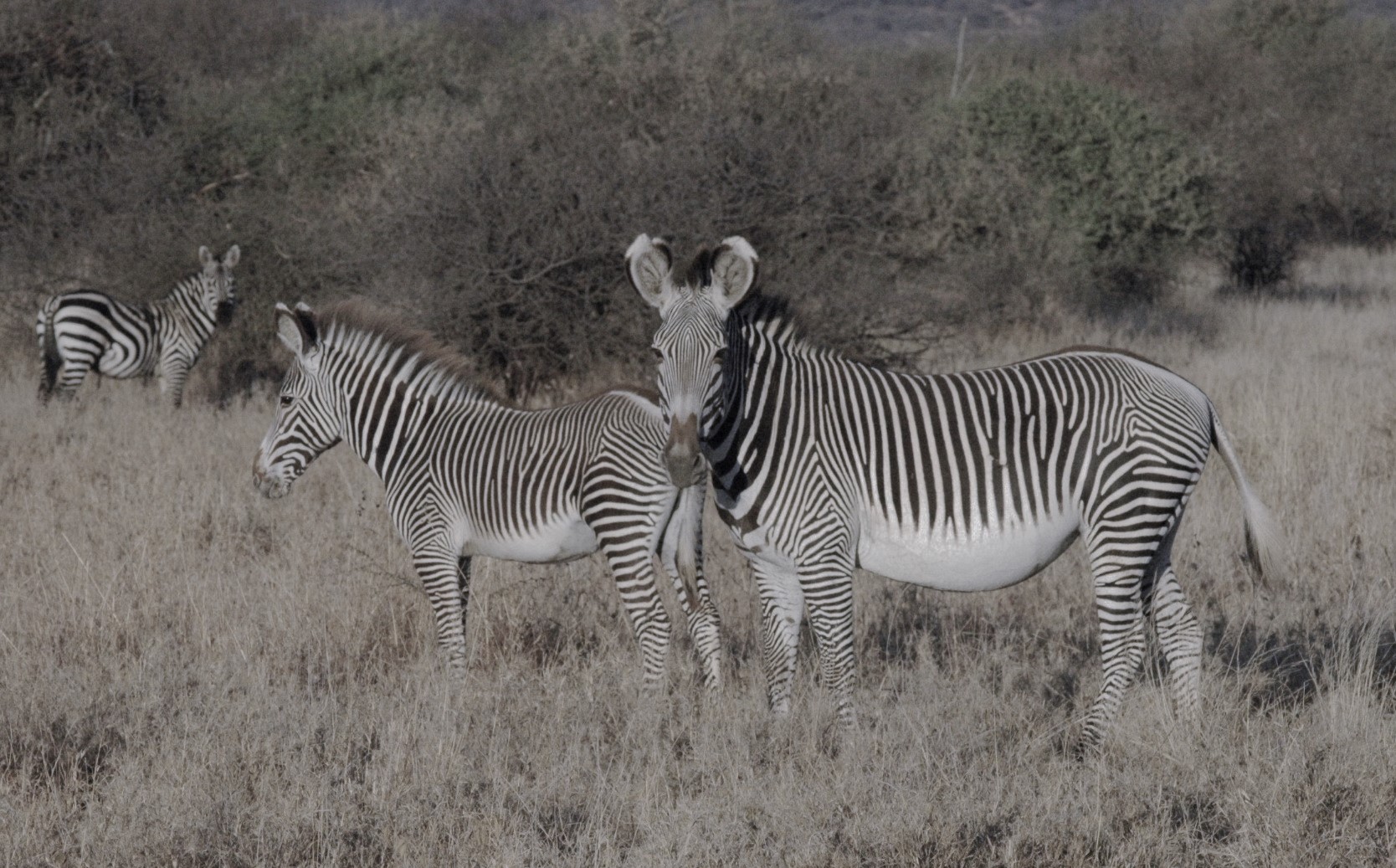 Note the difference in stripe pattern between the Plains zebra in the background compared to the two Grévy’s zebra in the foreground. ©James Denny

Why do zebra have stripes?

Over the years there have been a variety of hypotheses made regarding the function of the stripes, ranging from confusing predators with the dazzle they create when in motion, to providing thermoregulatory elements through the combination of the black and white coloured surface area. However, the most strongly favoured theory revolves around biting flies, like tsetse, which appear to prefer landing on surfaces of a solid colour as opposed to the contrasting colours of a zebra. This theory was tested in an experiment within a confined space shared with horses and has also been proven through the painting of white stripes onto cattle resulting in reduced irritation from biting flies. 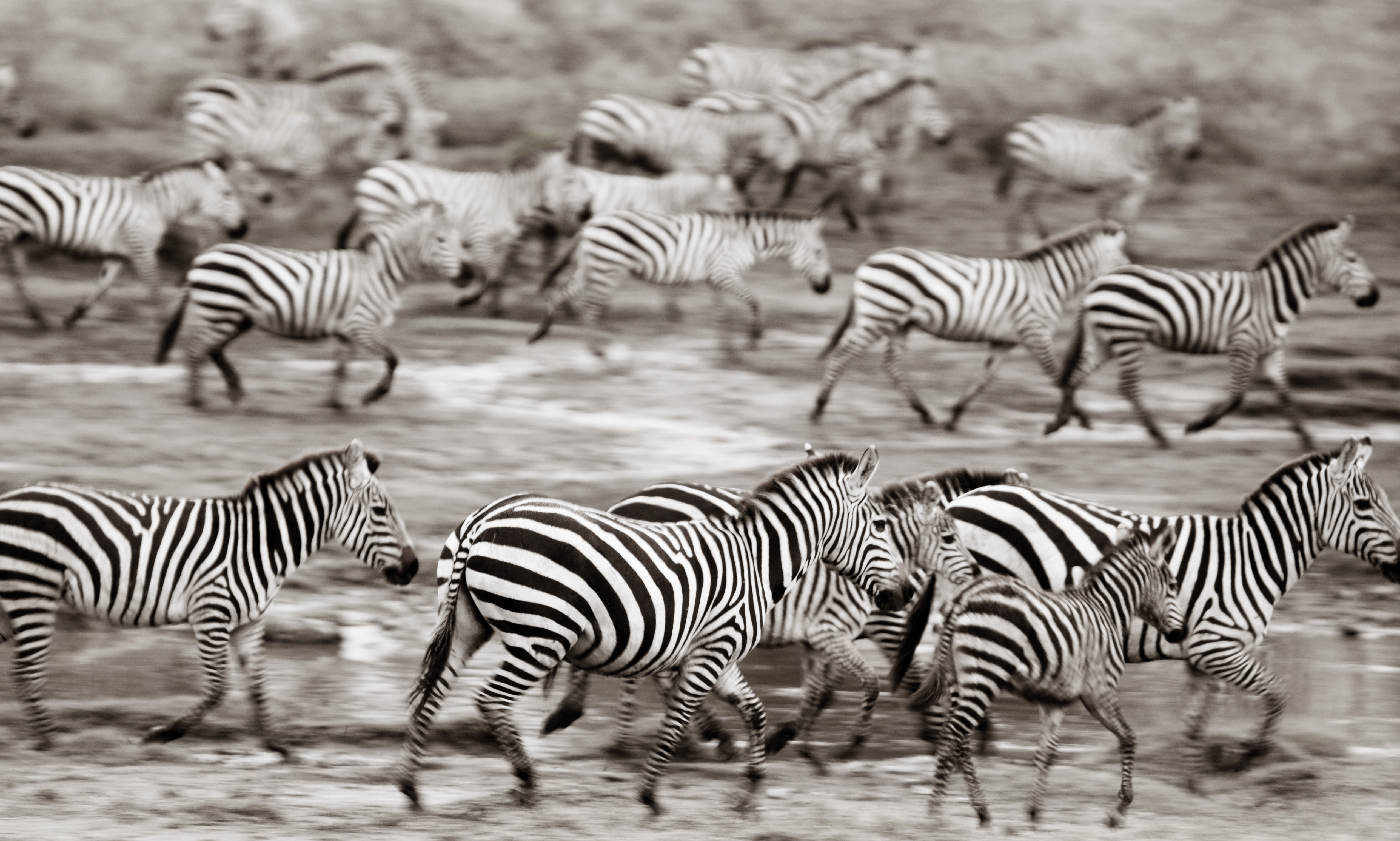 Do the stripes of zebra make it difficult for predators to identify individuals within a herd? ©Caroline Gibello

The science behind the stripes

One of the most frequently asked questions when viewing zebra is, “Is the zebra black with white stripes, or white with black stripes?” Although long thought to be white with black stripes, the opposite is in fact accurate. The white fur of a zebra represents an absence of melanin, which is the pigment generated by the melanocyte cells found in hair follicles. These cells are responsible for providing colour to hair and skin in all animals. Since the white stripes are only created due to the pigment being denied to the hair follicle, the consensus is that the base colour of a zebra is black, and it is therefore black with white stripes. 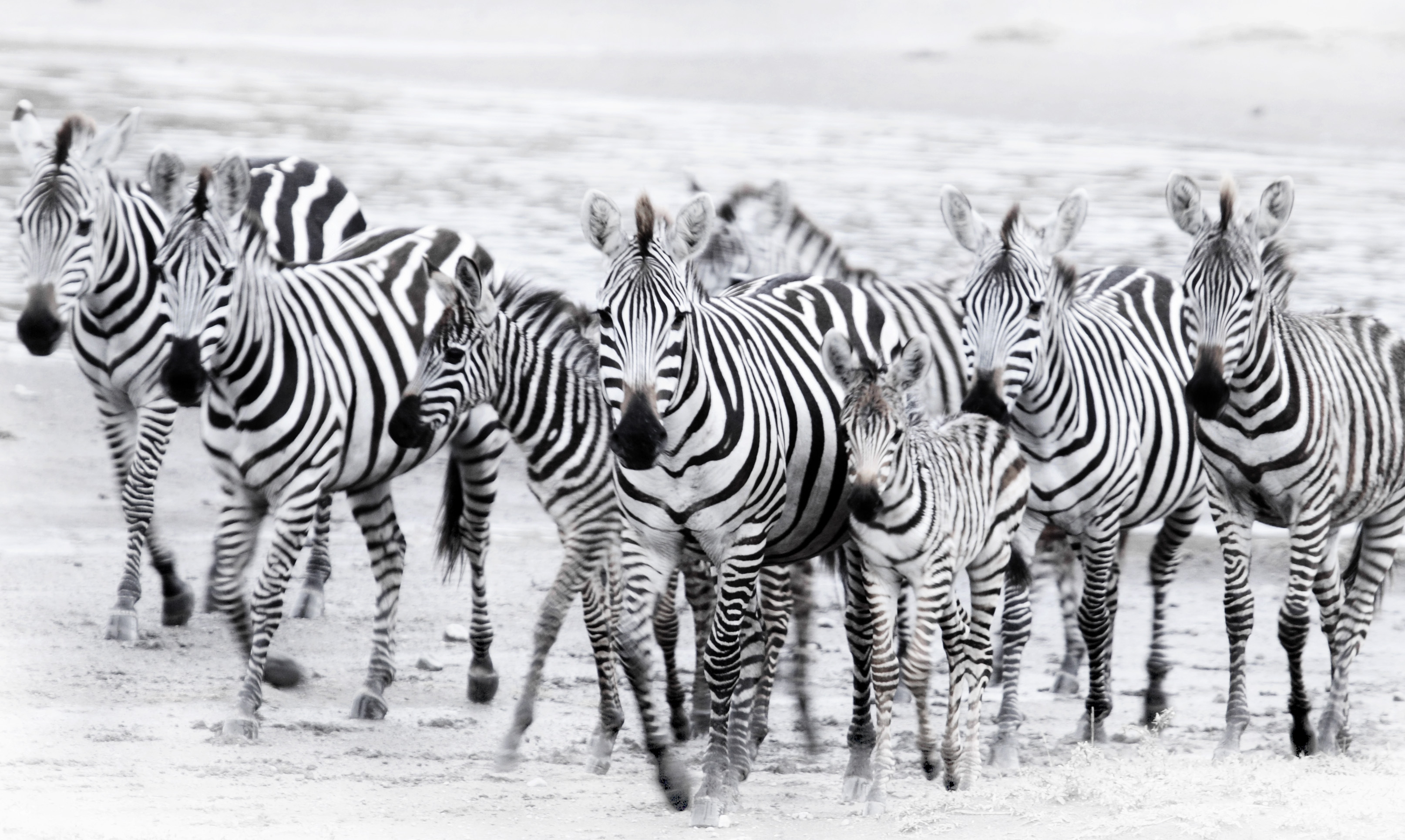 Zebra are considered to be black with white stripes, although it often looks like the opposite should be true. ©Caroline Gibello

Where to see them

A two-centre stay in Kenya, combining Ol Pejeta Conservancy with the Masai Mara, will allow the opportunity to view both species of zebra. Given the endangered nature of the Grévy’s, they are housed in the Endangered Species Enclosure in Ol Pejeta, to both protect them from predators and prevent hybridisation. In the Masai Mara, resident Plains zebra are seen year-round but are at their highest densities during the migration months from July to October. Ol Pejeta Bush Camp, located in Ol Pejeta Conservancy with views of Mount Kenya, combined with Rekero on the Talek River in the Masai Mara Reserve, provide the perfect accommodation offering for an authentic Kenya safari experience.

Contact us today to start planning your next adventure.