In the cool humidity beneath the forest canopy, the still air is punctuated by the calls of birds and insects, the shriek of a vervet monkey echoing through the trees, or the rustle of the undergrowth as a startled bushbuck takes flight. This, is Rubondo Island. 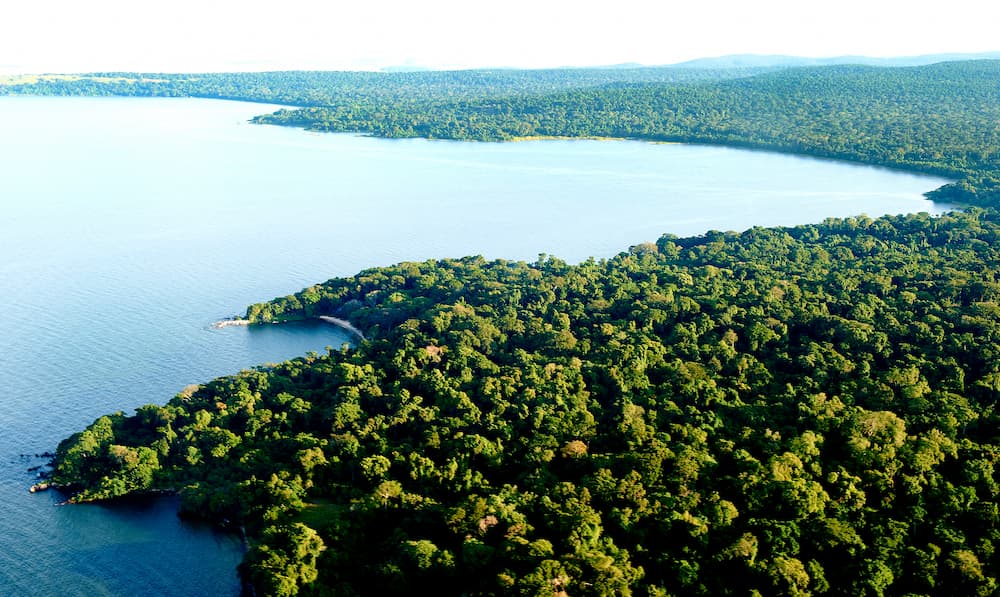 Rubondo Island from the air, highlighting the extent of the forest cover across the island.

Situated in the southwestern corner of Lake Victoria, the island is 26 kilometres long and up to 10 kilometres wide, making it Africa’s largest island national park. Just a 75-minute flight from the open grass plains of the Serengeti, the contrast that the environment of Rubondo Island offers makes it difficult to believe that you are still in the same country. From dry and dusty savannah into lush and green rainforest, the change is astonishing. And, with only Rubondo Island Camp on the island, this becomes your exclusive island to explore. 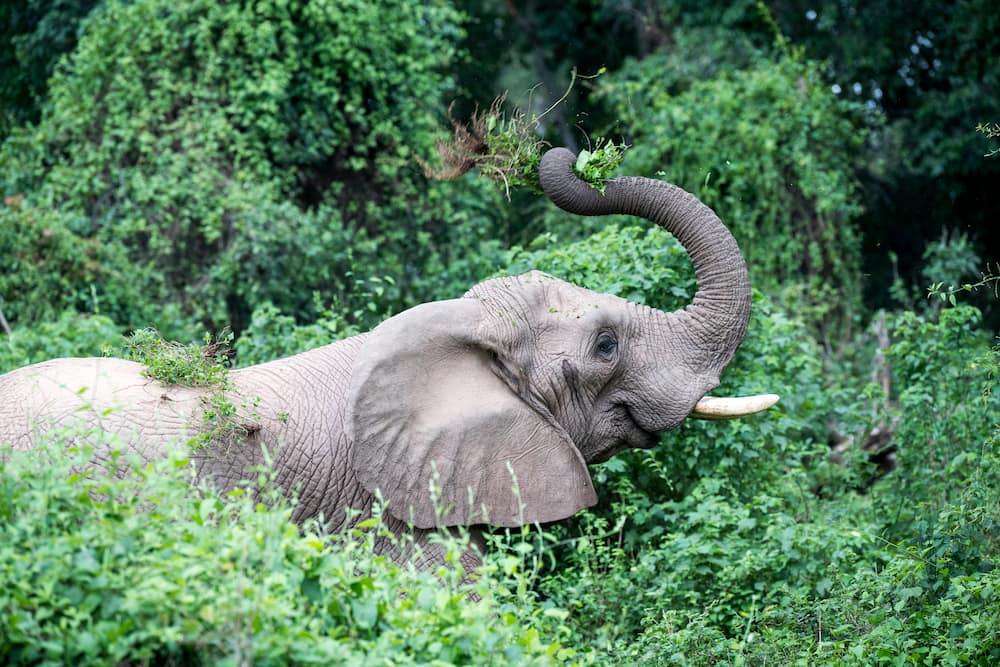 Nearly 80% of the island is covered in pristine rainforest, home to an array of wildlife and bird species. Forest elephant push their way through the dense forest floor growth, their tusks evolved to be smaller than their mainland counterparts and therefore less likely to get caught in snaring vegetation. The shy Sitatunga, a swamp-dwelling antelope not to be confused with a bushbuck, is regularly found near the water’s edge or in the shallows around the island. In the south of the island there are open plains, where herds of giraffe step out into the sunshine to graze vegetation more suited to their savannah-based preferences.

Stepping into the forest requires a moment to allow the eyes and senses to adjust to the new surroundings. In contrast to the warm sun and open air, below the enclosed canopy of the equatorial rainforest the humidity climbs and there is considerably less light. There are more shades of green than the eye can count, with the occasional highlight of intense brightness where a slice of sunlight has pierced the canopy overhead. There is constant activity throughout the treetops as both vervet monkeys and black and white Colobus monkeys chatter and chase amongst the upper branches. Two troops of chimpanzee, totalling over 60 in number, reside within the forest, making for an exciting tracking adventure through the undergrowth. The story of these chimpanzee, how they arrived on the island and the habituation process they have been through, is all incorporated into the chimpanzee experience available from the camp. 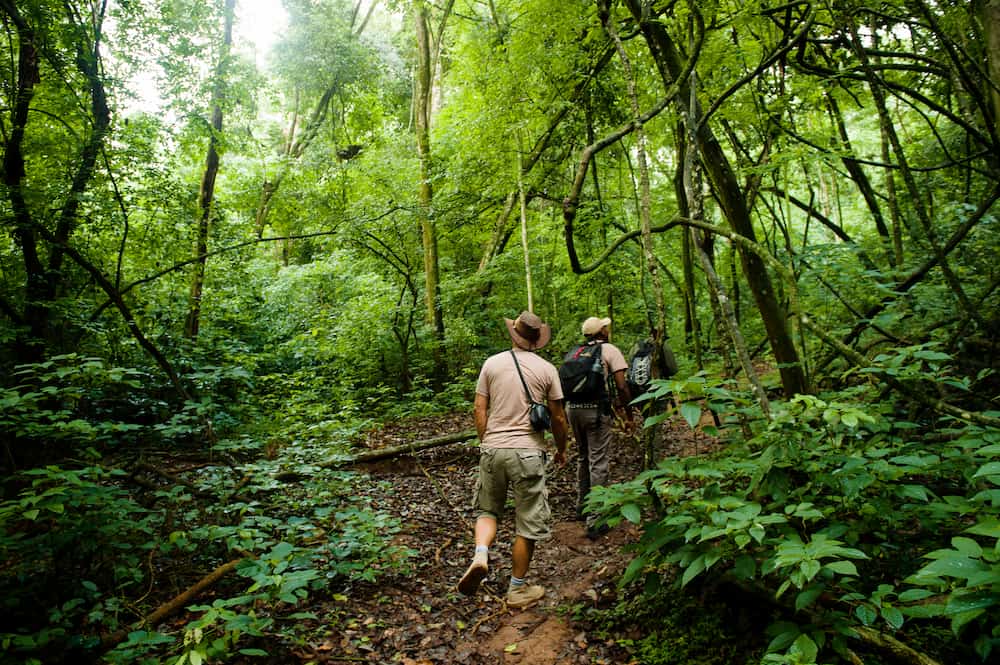 Exploring the vast equatorial rainforest on foot amongst every shade of green imaginable.

Over 400 endemic and migratory species of birds have been recorded across the island, including pied and malachite kingfisher, paradise flycatcher, African grey parrot, and open bill stork. While walking through the forest offers a visual and auditory feast for the senses amongst the constant cacophony of colour and sound, exploring the periphery of the island from the water reveals an equally remarkable experience. The African fish eagles which could be heard from the forest floor can now be seen surveying the open waters of Lake Victoria from their tree-top perches. Bee-eaters flit across the water’s surface and here, around the shoreline of the island, is where you are most likely to encounter a spotted-necked otter. Small neighbouring islets host populations of lazy crocodiles basking in the sun, while breeding colonies of cormorants paint the rocks white. 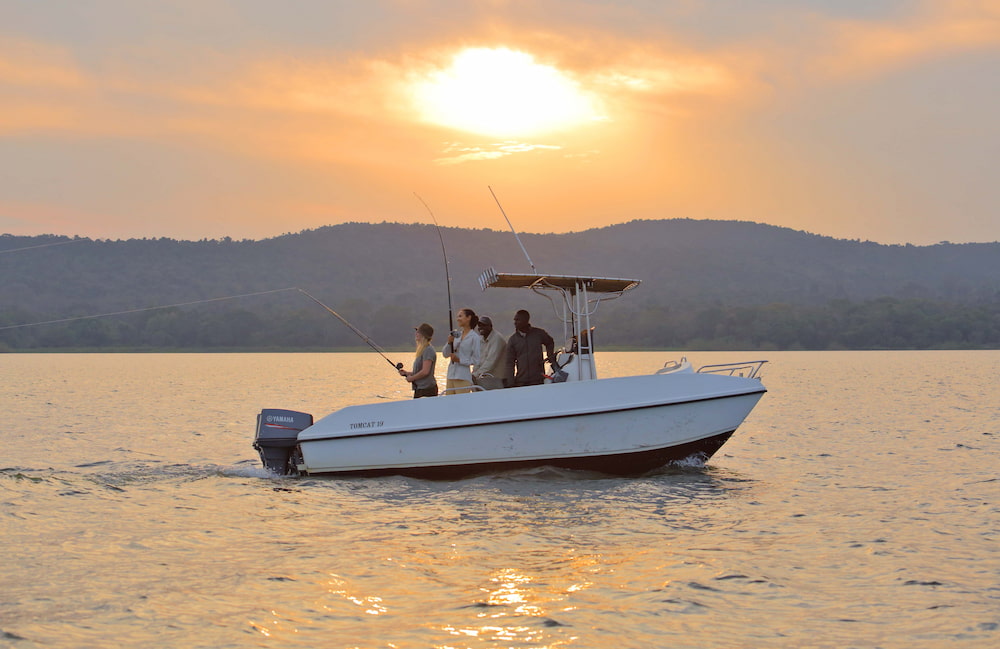 Afternoons spent on the water offer opportunities for birdwatching, fishing, and spectacular sunsets.

For an element of action within your afternoon on the water, run out the trolling lines and plant your fishing rod in the holder before reclining with a cold drink. However, don’t expect to be stationary for long as there are substantial numbers of Nile Perch in the waters of Lake Victoria, some weighing in at over 150 kilograms! The catch-and-release fishing offers an exciting alternative activity to the overall safari experience and, as it’s accompanied by seasoned guides, requires no previous fishing knowledge. Arguably, the best part of an afternoon boating excursion, is taking the time to enjoy sunset from the water. It’s a spectacular affair, with a full spectrum of colour reflected and enhanced off the water’s surface. Following the shoreline back to camp as the light begins to fade, expect to see a hippo or two emerging from the shallows in search of improved grazing opportunities in the cool evening air.

“Rubondo Island camp should not be missed by anyone planning a safari trip who is interested in something a bit more adventurous. The chimp trekking is a huge rush of excitement but it is by no means the only thing Rubondo has to offer - the pristine remote location, unique variety of wildlife, and incredible staff are what makes Rubondo a truly special place.” - Guest Jan 2023, Tripadvisor 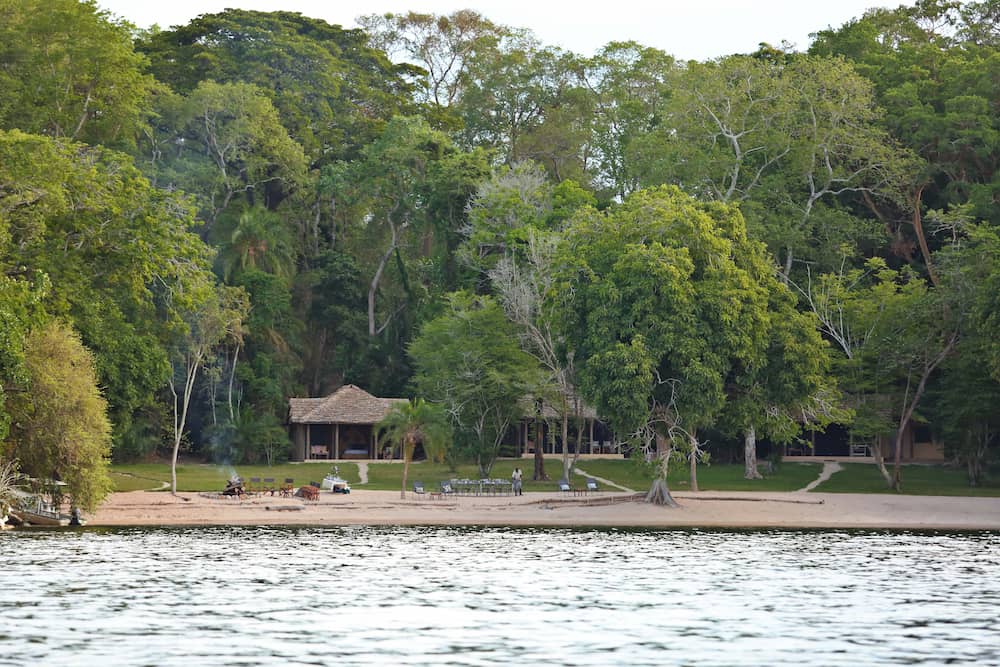 Rubondo Island Camp, sitting beneath the tall trees of the rainforest.

In a sheltered cove on the eastern side of the island, a sandy beach gives way to a grass lawn before running into the thick equatorial rainforest. Interspersed across the lawn, hard up against the treeline, are eight thatch-roofed cottages each complete with a sheltered veranda from which to absorb the views across the water. In the late evening, expect to hear the gentle pulling of grass as hippo come to graze on the green lawn outside your cottage. Lying in bed at night, there’s something profoundly unique about being able to hear both the gentle lapping of the waves on the lake shore in combination with the sounds of the forest settling down behind you. 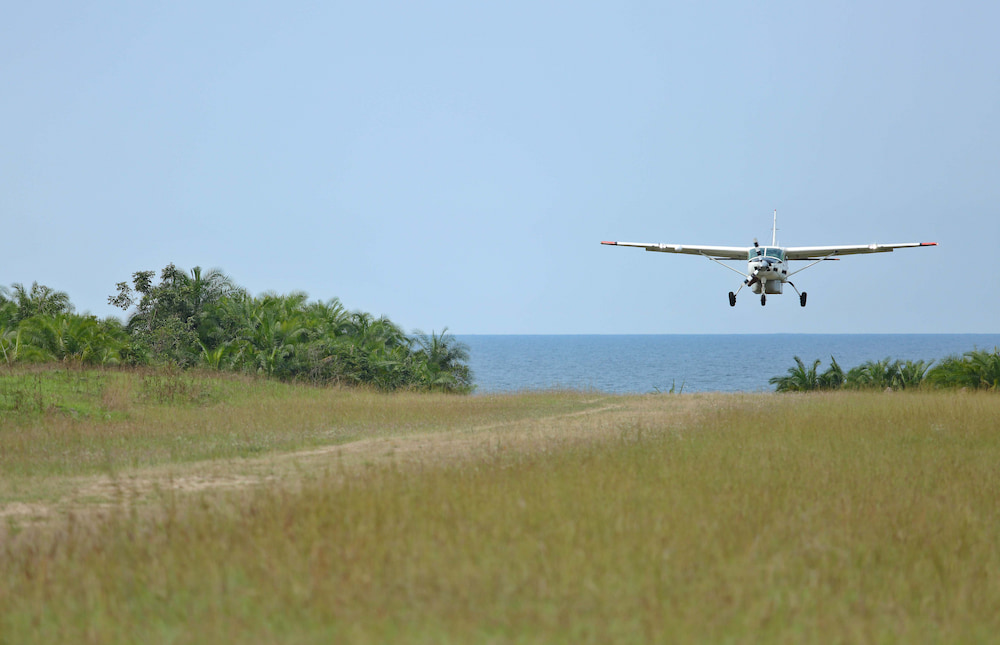 The grass airstrip of Rubondo Island makes for an exciting arrival.

Despite offering an experience so vastly different to that of the Serengeti, Rubondo Island is easier to access than one may expect. Regular scheduled flights depart from all Serengeti airstrips, heading west for the grassy runway found on the island. For new bookings travelling before 31 December 2023, Asilia is offering complimentary return flights from anywhere within the Serengeti provided there are at least 2 people in the booking staying a minimum of 3 nights on the island (T&Cs apply). Such a remarkable private island experience within a stone’s throw of the Serengeti, why would you not add Rubondo to your next safari experience?