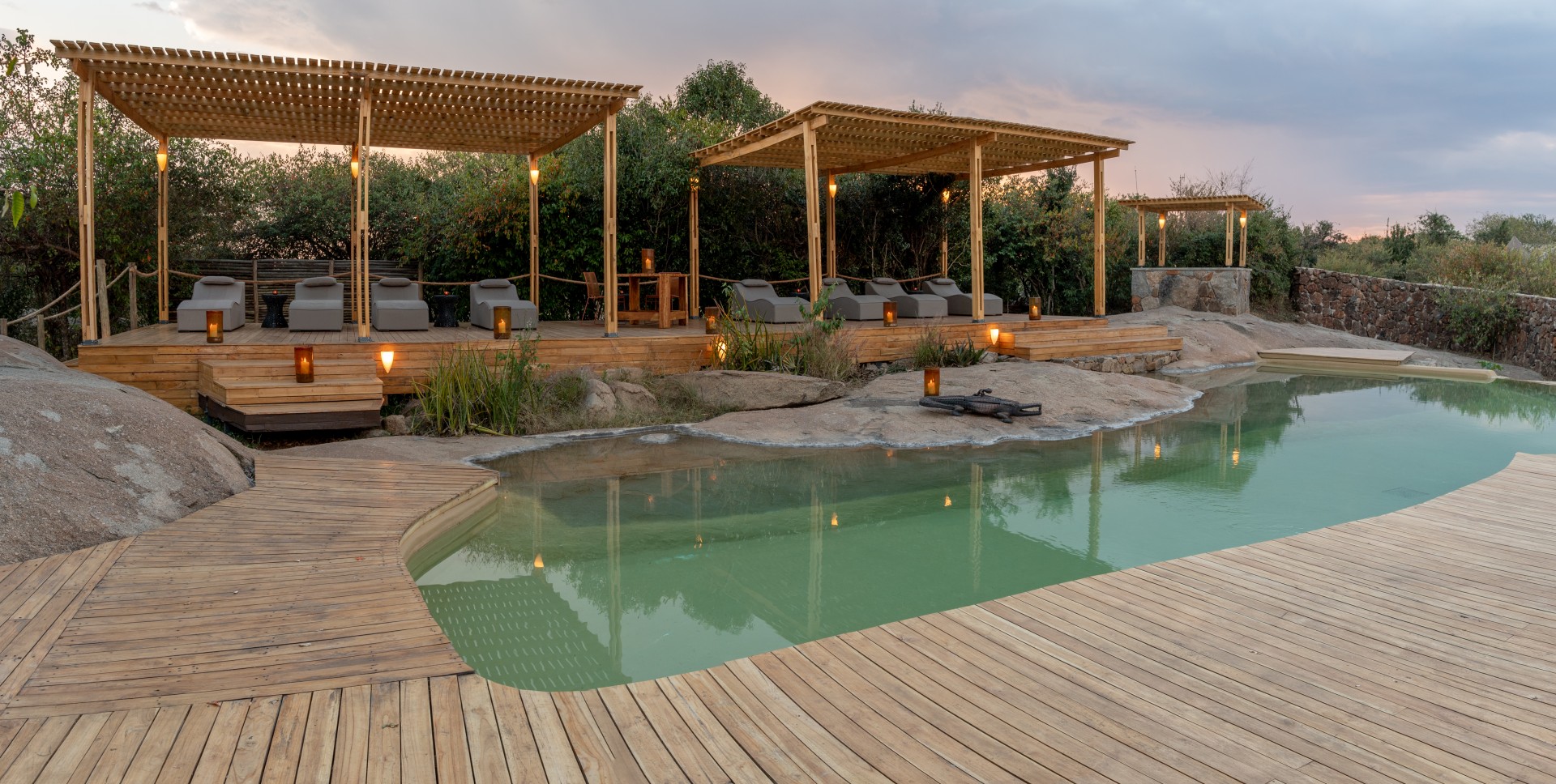 Asilia Africa’s Sayari has reopened after a complete rebuild. The newly reimagined property opened just in time for the annual Great Migration, which sees nearly 2 million wildebeest cross the Mara River. Sayari has the enviable location of being the closest property to the river this season, meaning Sayari guests always have a front row seat for the drama of a wildebeest crossing.

Asilia is known for pioneering safaris to remote locations where they can have the maximum positive impact and Sayari is no exception. The camp began life as a traditional mobile camp, moving north to south through the Serengeti, following the journey of the Great Migration. In 2009, Sayari became the first permanent camp to put down roots in the northern Serengeti, an area plagued by bush meat poaching. With no other means of livelihood for the surrounding communities, hunting the abundant wildlife was common practice. The arrival of the camp secured the long-term conservation of this region and created employment opportunities for many in the communities on the park’s boundary. Many of the camp’s original team were former poachers. Fifteen years on, Sayari has played a pivotal role in creating a conservation economy in the northern Serengeti. The camp is entirely Tanzanian run and of the 55 staff, 80 percent are from local communities. A US$5 per person, per night conservation contribution goes toward local community projects. To date, Sayari has donated USD$121,500 to assist local NGO Honeyguide in anti-poaching operations through a canine tracker team.

“Sayari and Asilia pioneered the tourism driven conservation of this magical region back in mid-2000s. Through our heavy investment we are committed and determined to do so again. The recovery of this region is critical for the country, the region and all those who benefit from that” says Gordie Owles, Commercial Director.

Throughout the challenge of the COVID-19 pandemic and related international travel bans, Asilia kept a circuit of camps open as a testament to their commitment to their employees, local community partners and conservation efforts. Sayari’s reopening complements the award-winning Highlands in Ngorongoro and the newly redesigned Namiri Plains in the eastern Serengeti to create an itinerary of stylish properties with a light footprint in the very best locations.

Asilia has been carbon neutral since 2009 and strives to develop practical ways to further reduce its footprint. The new Sayari continues that tradition by introducing the first solar-powered microbrewery in the bush, in partnership with Wayout, a Scandinavian start-up revolutionising the brewery industry. The new brewery makes beer and soft drinks on site, as well as purifying water and producing sparkling water, all using solar power. By doing so, Asilia removes the need for plastic bottles and cans in camp, not only reducing waste, but also reducing the transport carbon footprint. The brewery produces four unique beers for Asilia, the perfect drink for a safari sundowner. 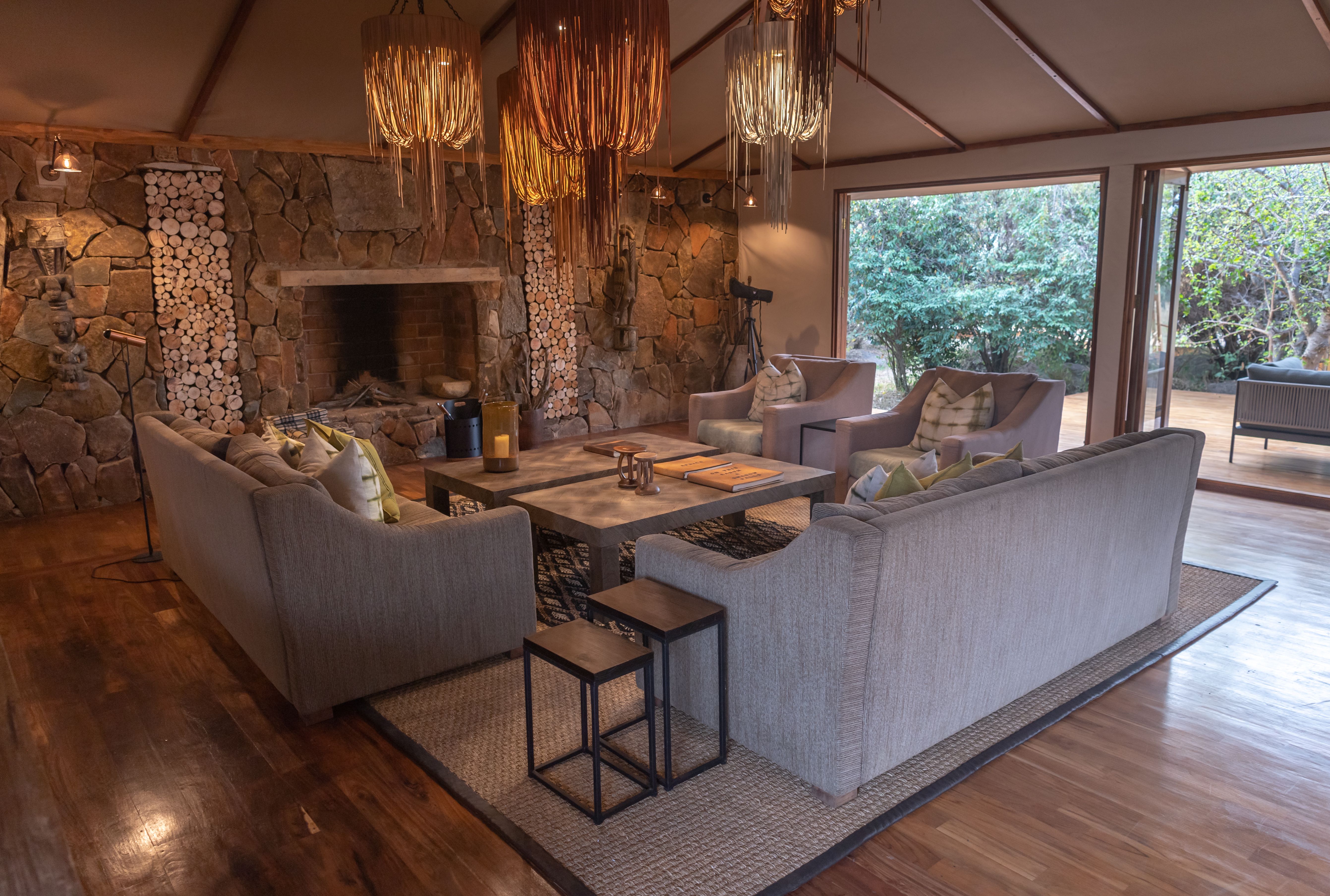 The new Sayari takes its inspiration from the colourful culture of the Kuria people who call the northern Serengeti home. The spacious main area seamlessly blends inside and out, with sliding glass doors allowing for uninterrupted views of the rolling Serengeti plains. The Kuria are depicted in striking original artworks by South African photographic artist Graham Springer. Music is integral to the Kuria culture, playing a key role not just in ceremonies and celebrations but also daily life. A music station displays traditional instruments used and a listening station offers guests the opportunity to listen to samples of different songs recorded from traditional musicians in the villages around the Serengeti.

The camp offers 15 spacious tents (including a family tent sleeping up to two adults and three children) that all have views of the rolling Serengeti plains ahead. Sayari is not fenced and wildlife moves freely through the camp. It is not unusual to see zebra and wildebeest moving between the tents on their journey to cross the Mara River. The tents at Sayari reflect the iconic flat-topped hill, Turner Hill, in their design. Inside, the colour palette has been inspired by the patterns in the rocks that stud the grass plain landscape, with a rich copper accent. In homage to the Maasai culture of beading, cushions are decorated with delicate beading sewn by Maasai women. Spacious decks wrap around each room and the bathroom comes complete with views of the open plains. The bathroom includes a freestanding, extra-large bath with a view, as well as both an indoor and outdoor shower.

In anticipation of a desire to travel more consciously post-COVID-19, Asilia has been putting time and energy into slowing down the safari experience, encouraging guests to spend longer in each camp and move and fly less. This is a response both to a desire to slow down but also to lower the traveller’s carbon footprint. The new Sayari also features an enlarged swimming pool area, the perfect place to spend an additional day spotting wildlife from the rim flow pool, as well as a spa offering treatments with the eco-sensitive South African brand, Africology.

Asilia has already welcomed guests back to the new Sayari to rave reviews.

"Fifteen years ago when we were choosing a site for Sayari, there were no roads in the area and no airstrip. We slept in our car at the ranger post. Over the past couple of years, when I landed at Kogatende airstrip and saw the fleets of safari cars, I was proud to know that we played a pivotal role in creating a conservation economy there. The presence of tourism helped drastically reduce the bush meat poaching, but it was only successful because we worked hand-in-hand with the local communities, creating benefits for them from the new tourism industry,” Jeroen Harderwijk, Asilia’s managing director, says. “We will continue working hand-in-hand with local communities during this difficult time to support them and I am delighted we are already welcoming our first guests back on safari in Tanzania and Kenya.’’