For all their bulk and presence, elephants can communicate an astonishing range of emotions through gestures. Knowing how to read their body language means you can appreciate their fascinating world in deep ways. We breakdown a few signals to help you do just that.

Socialising is a fundamental aspect of an elephant’s life. Individuals must learn a variety of greetings to navigate their relationships. Entwining trunks is one of them. The action is slow with males, and more sudden with females.

Elephants will also approach stationary companions from behind and rub their heads, ears, flanks or shoulders against them. This type of bonding usually takes place between closely related individuals. 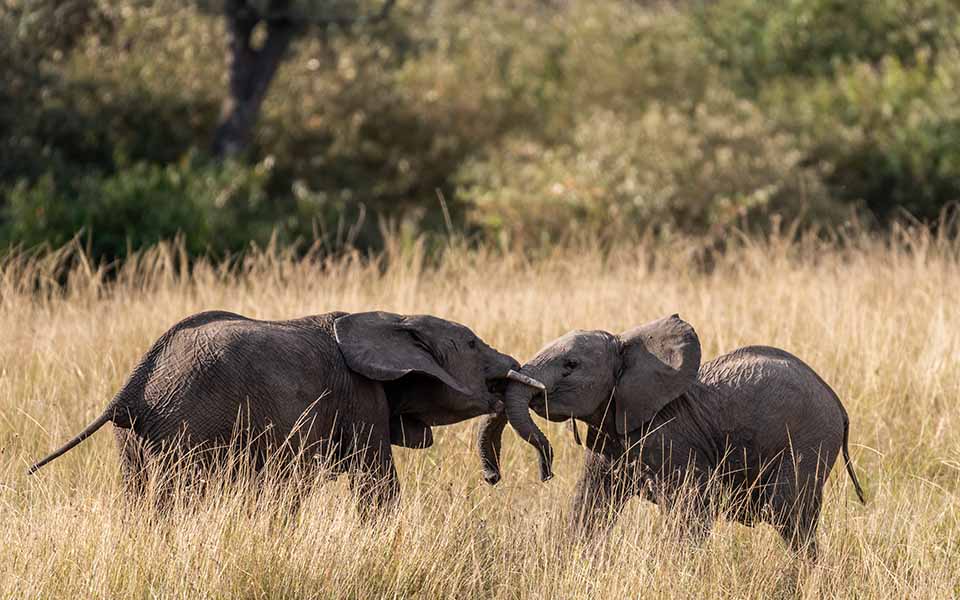 A female in sexual heat (estrous) makes her interest in a particular male obvious. She may follow him around or quickly stand next to him if smaller males pursue her. She may also back into him, presenting her rump for testing.

For his part, a male in a heightened sexual state (musth) will approach an estrous female and push her with his forehead before mounting her. She will push back to show she’s ready to mate.

An elephant calf receives comfort, protection and reassurance from its mother and other family members. They will caress it in a variety of ways, such as wrapping a trunk over its back leg, around its belly, under its neck or over its shoulder. 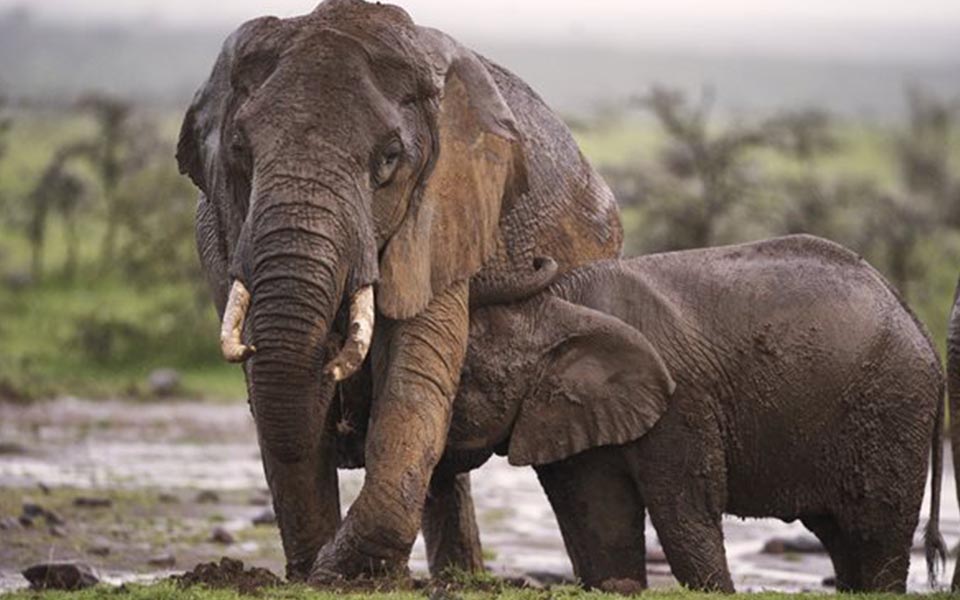 Play-time is invaluable for the young of some species. Essentially, it gives them a safe space to train moves and defences they will depend on when they mature. They abandon their games when they grow up.

Elephants are not so ruthless when it comes to sport. Instead, calves and adults will amuse themselves in various ways for the sake of having fun. They may play with logs, sticks or whatever novel objects they happen by for 10 to 20 minutes, rolling their feet over the new toy or picking it up and biting it. Other elephants often queue for a turn.

Elephants can also be subtle. More specifically, they can appreciate playful moments finely, even to the point of feigning annoyance with each other. The ‘tell’ is when they abruptly shake their heads, causing their ears to flap.

Charging at one another (or indeed people) and pretending to trip is a big joke. Given that their level of self-awareness includes a sense of humour, it’s little wonder that many East African myths revolve around elephants’ intelligence.

Larger males may kneel to coax shy companions into a round of playful sparring. Otherwise, elephants invite each other to play by, among other things, putting their trunks in their mouths. 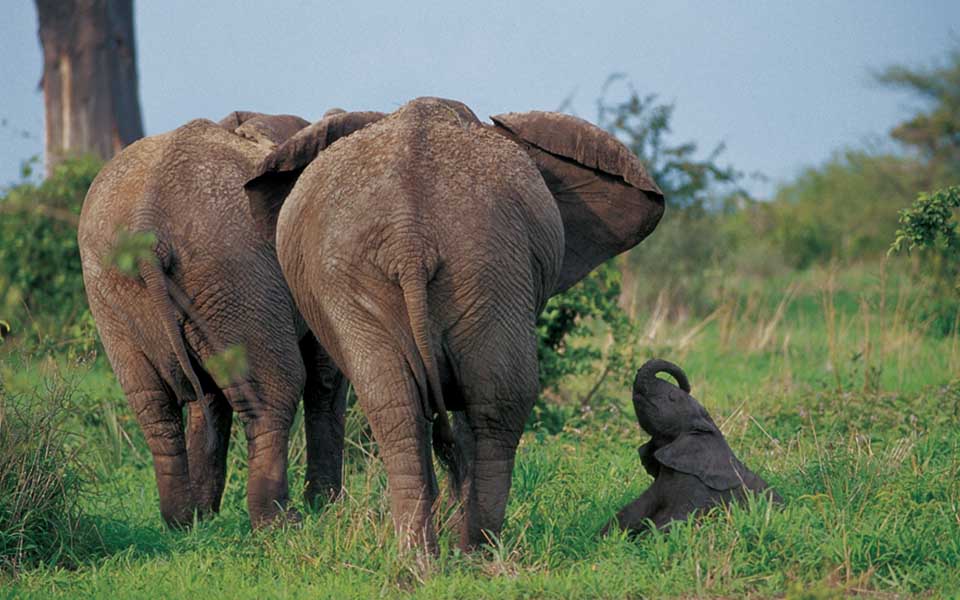 Elephants show fear in different manners. An individual may angle away from a rival and stand with its heads low to indicate a lack of threat. If the situation escalates, the elephant may retreat, flattening an ear against its body to better observe the aggressor.

On the subtler side of things, an elephant may raise its tail as a sign of apprehension. Trunk-twisting, foot-swinging and ear-stiffening are other possible indicators of fear. An individual will touch its ears, face, mouth, trunk, tusks or temporal gland to reassure itself.

Though famed for their emotional intelligence, elephants can see red and crush things. Their faces and bodies signal their aggression.

Their eyes are revealing. If an individual is angry, its eyes open wider. Lazy, half-closed eyes show that it’s relaxed. An elephant will also spread its ears to intimidate a perceived threat, holding its head high, raising its trunk and looking directly at its adversary.

Abrupt head shaking is another sign of aggression. It usually starts with a head twist, followed by quick rotation from side to side. The elephant’s ears slap against the side of its face or neck, producing a loud sound meant to frighten opponents.

An elephant’s arsenal of intimidating signals includes standing tall. That is, an individual will increase its height by raising its head and chin, and looking down at an adversary over its tusks. The elephant might stand on a log or an anthill to augment the effect.

Charging can either be mock or real. In the context of mock charging, an elephant may rush toward an adversary and kick dust as it abruptly stops. Oftentimes, it will issue a shrill trumpet blast as well. If the elephant means to follow through, it will curve its trunk tightly, so that it can strike with its tusks. It will execute a real charge in silence.

Elephants have a sophisticated understanding of death, going so far as to pay homage to their dead. They may use their tusks and trunks to try and feed an elephant carcass, or they could present their rumps and back toward it. 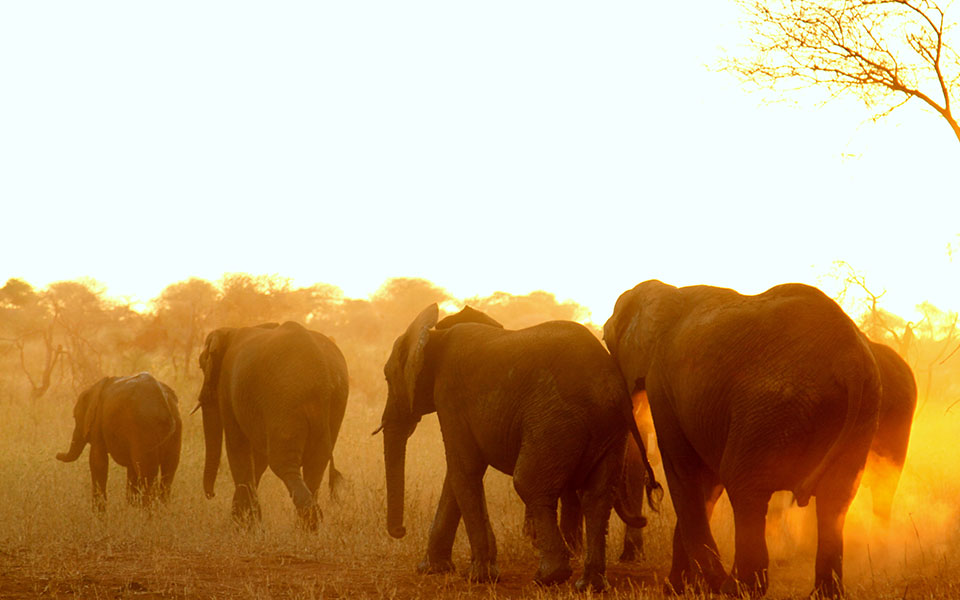