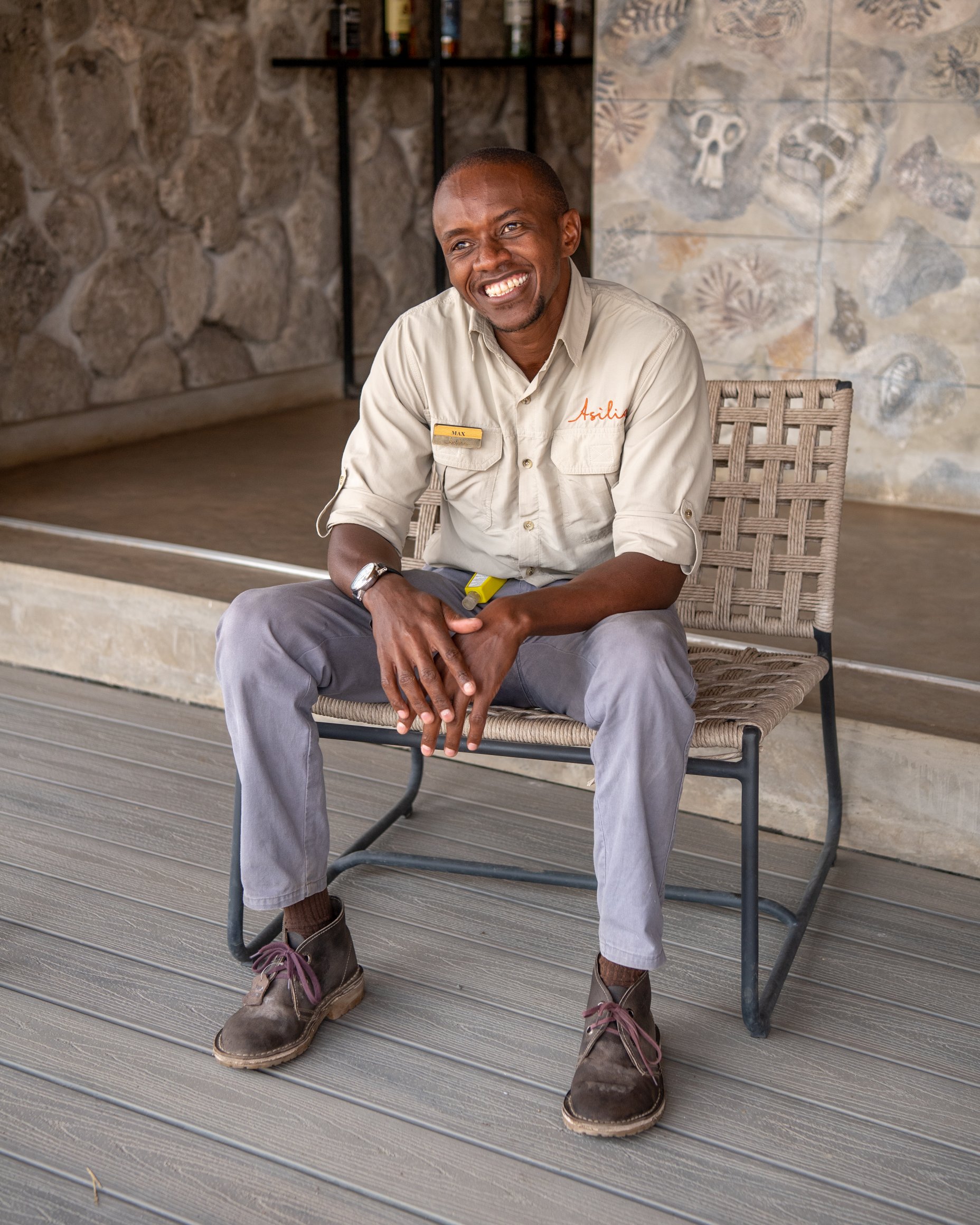 We want to introduce you to our superstar bartender and waiter Max, who has been part of the Asilia family at Namiri Plains for the last two years. Max is incredibly enthusiastic and hard-working and would one day like to manage an Asilia camp. As well as being passionate about Africa’s big cats, Max has climbed Mount Kilimanjaro, not once, not twice but TEN times! He even participated in the Kilimanjaro Marathon on his tenth ascent. Scroll down to read more about our wonderful Max.

I used to be based at the Asilia camp in Ruaha National Park and one day I was serving a private dinner to guests by the swimming pool. Occasionally we get leopards coming to the pool at night to drink and as I was serving dinner, we heard the rock hyraxes make an alarm call. Suddenly, a huge male leopard appeared and went to the edge of the pool; I had to stop the guests, mid-dinner, and ask them to accompany me to the washroom area from where we could safely watch. After drinking, he disappeared into the night and the guests could continue eating. I was so excited to see the leopard so close – I never realised how big they were!

How did you end up at Namiri Plains?

I asked to work at the Namiri Plains because of the cats. That’s why I’m here. There are lions, cheetahs, leopards, caracals, servals, wild cats... everything! This is now my third year working for Asilia and my second year at Namiri and I still love it just as much as the first day I arrived.

Tell me about Mount Kilimanjaro.

As soon as I was old enough, I tried. I made it all the way to 3,700m but then I got altitude sickness and could not go any further. That was the first time I failed but I couldn’t stop. I tried again and again – three times total I failed, and I was getting to the stage where I was asking myself if it was worth it. However, on the next attempt, I succeeded. From that time on there were no more failures and every time I’ve climbed Mount Kilimanjaro since (7 times!), I’ve reached the top!

The last time I climbed it, I actually ran the Kilimanjaro Marathon. The organisation I ran for raise money for those suffering with HIV and AIDS. I thought to myself: ‘I’ve climbed the mountain nine times; I know the mountain! So, why can’t I run up the mountain?!’. I knew it would be a challenge but I continued to exercise normally as I’ve never specifically trained to climb Kilimanjaro. However, I spent time preparing myself mentally. I think that to reach the top you must believe that you will do it and have the mental strength to keep putting one foot in front of the other, no matter how hard it gets. For me, I don’t put a time limit on my ascent. It doesn’t matter how long it takes me, as long as I get to the very top.

Actually, I think it is being able to take care of my mother by doing what I love. I am the last born in my family and in my tribe, it is the youngest child’s responsibility to look after their parents. It’s so rewarding being able to give my Mum whatever she wants and needs at the end of each month.

I know that my siblings would help me take care of our mother if I needed it, but they looked after me so well when I was growing up. They made sure I went to school and encouraged me to get a good job. They gave up a lot to make sure I had those opportunities and now it is my turn to give back.

Although my Mum has not been able to visit me at work yet, I hope that one day she will. I would love to manage an Asilia camp in the future and if I can achieve this, she will be able to see for herself why I love the bush so much.

I think the biggest thing the staff don’t know is what makes me truly happy. I am at my happiest when I see my team succeed. If Veronica or Hassan do a great job with guests or have a fantastic review, it makes me so happy and proud to work with such amazing people.