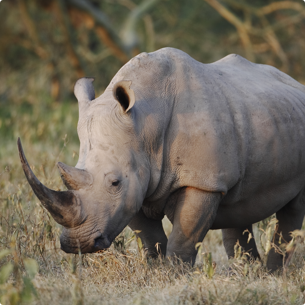 After a few months’ hiatus due to the COVID-19 pandemic, the international team of scientists and conservationists at Ol Pejeta Conservancy was able to continue its ambitious programme to save the northern white rhino from extinction. Last week, researchers harvested 10 eggs from the last remaining two individuals, Najin and Fatu, in the third-ever ovum pickup procedure in northern white rhinos at Ol Pejeta Conservancy in Kenya.

The first ground-breaking “ovum pickup” was in August 2019 and eight months after the second, the team repeated the procedure with female northern white rhinos Najin and Fatu. The animals were placed under general anaesthetic and 10 immature egg cells – two from Najin and eight from Fatu – were harvested from the animals’ ovaries using a probe with a movable needle guided by ultrasound. The anaesthesia and the ovum pickup went smoothly and without any complications. The eggs were airlifted immediately to the Avantea Laboratory in Italy. In the coming days they will be incubated and matured, fertilized with sperm from already deceased northern white rhino bulls. The hope is that they successfully lead to viable northern white rhino embryos that will be stored in liquid nitrogen alongside the three embryos generated in the previous procedures.

This procedure was conducted several months behind the original schedule of BioRescue, the international consortium led by the Leibniz-IZW and partially funded by the German Federal Ministry of Education and Research. The COVID-19 pandemic has severely impacted the project and its partners due to travel restrictions and contact prohibitions. East African conservations faces a new and unprecedented existential threat as they largely depend on tourism.

Asilia is proud to be a partner of the Ol Pejeta Conservancy. When you stay at our Ol Pejeta Bush Camp, you have the opportunity to meet Najin and Fatu and their carers, who will gladly tell you more about conservation efforts of this majestic ancient creature.