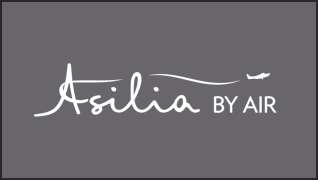 Jan to Mar
Jun to Dec 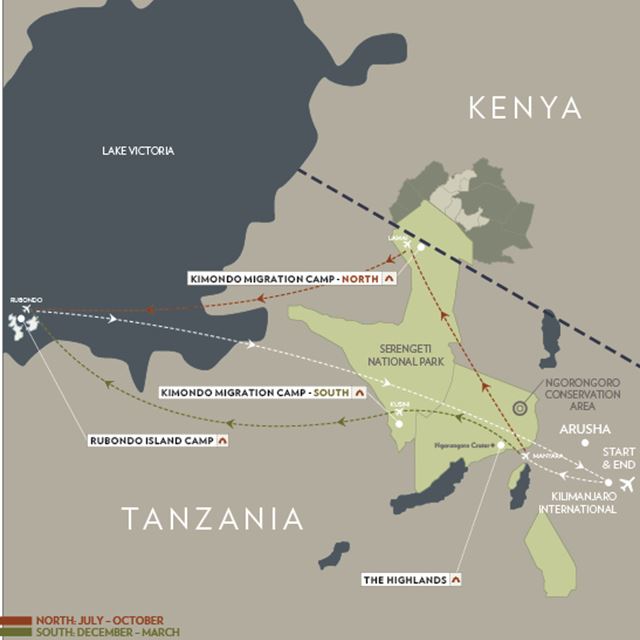 This is a thrilling safari combining some of Tanzania’s most rewarding national parks with the unique opportunity to be part of a chimpanzee habituation programme on an island in Lake Victoria. Begin at the Ngorongoro Crater, game-driving on the floor of this dormant volcano before flying to the Serengeti, staying in a mobile tented camp that follows the pattern of the Great Migration. Conclude your adventure on Rubondo Island, home to a chimpanzee population as well as other wildlife, including forest elephant, hippo, sitatunga and flocks of African grey parrot.

On arrival at Kilimanjaro International Airport you will proceed to the Coastal Aviation desk for your light-aircraft flight to the Manyara airstrip. A guide from The Highlands will drive you through coffee plantations towards the Ngorongoro Crater, a journey of 3 hours to reach The Highlands, enjoying a packed lunch on the way. Stop at the viewpoint overlooking the crater to soak in the spectacular landscape and continue your drive around the rim until you reach the Olmoti Crater, where you will stay at The Highlands for the next two nights. If you feel like stretching your legs, you can opt for a guided walk from the camp up to the rim of Olmoti Crater, passing through dense forest and waterfalls on the way.

After an early breakfast, depart with your guide for the Ngorongoro Crater, a drive of around an hour until you reach the descent road. Spend the morning game-driving on the crater floor, exploring in search of the varied wildlife that lives here. You’ll enjoy a picnic lunch during the heat of the day in a shady spot before driving back to The Highlands, where you can relax a little. In the late afternoon, a guide will take you to one of the nearby Maasai villages, where you can learn more about this rich culture and take part in their afternoon activities, which often include rounding up cattle into the boma for the night.

Depart by road for the Manyara airstrip, 3 hours away, where you will catch a flight to the Serengeti, a journey of 45 minutes. A guide from Kimondo Migration Camp will meet you at the airstrip and game-drive you back to camp, stopping at any wildlife sightings along the way. Enjoy a leisurely lunch and settle into your tent before going on an afternoon game drive to fully explore your new surroundings. The Serengeti is impressive in terms of both the diversity and density of wildlife found here, so there is plenty to discover each day. Return to camp in the early evening for drinks around the campfire and dinner.

Safari activities at Kimondo take place in the early morning and late afternoon, when the wildlife is most active. You will explore with expert guides on game drives, looking for the big cats that have made the Serengeti famous, as well as hippos wallowing in muddy pools and giraffe browsing the fresh shoots of an acacia tree. In between, you will return to camp for a delicious lunch, and to have a siesta or catch up on a good book. Evenings are spent sharing stories of your day’s adventures with other guests around the dinner table.

There’s time for a final morning game drive and lunch in camp before you fly out to Rubondo Island on Lake Victoria in the mid-afternoon. A guide will drive you through the dense tropical forest to Rubondo Island Camp, which will be your base for this final stage of your safari. Settle in and either relax for the rest of the day or perhaps go out for a boat trip on the lake in the late afternoon to enjoy sunset views across the water. 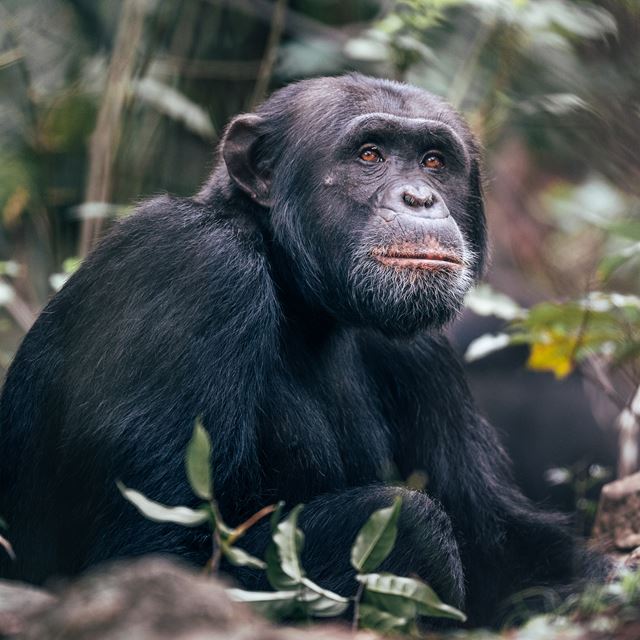 Activities on Rubondo Island take place in the morning and afternoon, with time during the heat of the day to relax in the shade at the lodge or by the pool. One morning you will set out with a guide, researcher and ranger to search for chimpanzees, typically travelling by boat to a different part of the island and then walking through the thick forest. The researcher will explain the habituation process along the way. While sightings are not guaranteed as this habituation programme is still a work in progress, it offers you a unique opportunity to be part of the conservation story of Rubondo and to be some of the first travellers to meet the island’s chimps. Other activities available include boating on the lake; fishing for Nile perch, which are found in good numbers here; birding to look for some of the unusual species found here, such as the African grey parrot; and forest drives, during which you may encounter sitatunga or a forest elephant.

Fly back to Kilimanjaro Airport

Enjoy a final breakfast overlooking Lake Victoria before a short drive to the airstrip for your morning flight back to Kilimanjaro Airport in Arusha, taking a picnic lunch with you. The flight will stop a few times on the way in the Serengeti and other airstrips to drop off/pick up passengers, and the total journey will be approximately 4 hours. You will land at the international airport so you can simply collect your luggage and check in for your international flight home.